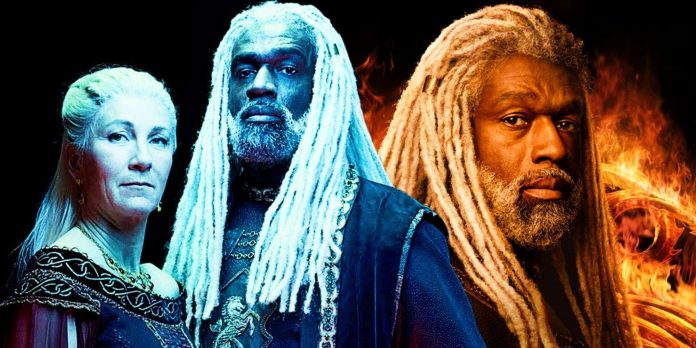 What’s most remarkable about House of the Dragon’s Corlys Velaryon, a.k.a the Sea Snake, isn’t the fact that he’s one of the only characters to survive from the beginning until the end of the Dance of the Dragons, but that he’s one of the most highly accomplished seafarers in the history of the Seven Kingdoms. The fabled past of Corlys Velaryon, who is played by actor Steve Toussaint, will certainly come into play during House of the Dragon, but isn’t likely to be seen on screen. Instead, Corlys Velaryon’s story will largely be associated with his wife Rhaenys Targaryen’s (Eve Best) former claim to the Iron Throne and their children’s political marriages to House Targaryen.

While Corlys’ story in House of the Dragon is apt to be one of the most compelling of the Game of Thrones prequel series, he’s one of a few characters whose backstories offer even more intriguing adaptations. While a younger version of the Sea Snake is hinted to be featured in House of the Dragon’s Great Council flashback, it still won’t get into the character’s history-making voyages that were detailed in George R.R. Martin’s Fire & Blood book. Rather, HBO is seemingly saving this era of young Corlys Velaryon’s life for The Sea Snake, another Game of Thrones spinoff series in early development.

Who Is The Sea Snake? House Of The Dragon’s Corlys Velaryon Explained

The backstory of the Sea Snake is one that deserves some attention in House of the Dragon, with the character being one of the most impressive voyagers that Westeros has ever known. As the heir to Driftmark, young Corlys Velaryon took up his family’s notable prowess at sea with a natural talent, having first sailed to Pentos at the age of six. House of the Dragon’s book-changing character would then join voyages every year thereafter, becoming a captain at the young age of 16 when he sailed from his home of Driftmark to the Targaryens’ Dragonstone and back.

After sailing across the Narrow Sea and to various isles in Westeros, Corlys would sail on the Sea Snake, a vessel designed and built by himself, on nine well-documented voyages to Essos. On his first trip, he sailed past the Jade Gate at Qarth to the Golden Empire of Yi-Ti and Leng, where he gathered silk, spice, and jade that doubled House Velaryon’s wealth when he returned home. Corlys’ next voyage was to Asshai, where he notably lost his “love and half his crew,” with his third adventure establishing him as the first Westerosi to sail the Thousand Islands and visit the locations of Mossovy, N’Ghai, and Nefer on Game of Thrones’ world map. On his ninth voyage to Essos via the Sea Snake, Corlys loaded his ship with gold, bought 20 more ships, and filled them with elephants and foreign treasures. The elephants died and six of the ships never made it home, but Corlys Velaryon returned incredibly wealthy and was officially dubbed the Sea Snake.

When Corlys’ grandfather died, he officially became the Lord of the Tides and leader of House Velaryon, having made his family even richer than Game of Thrones’ Lannisters and House of the Dragon’s Hightowers by this time. After becoming the Master of Driftmark, Corlys married 16-year-old Rhaenys Targaryen, the only child of the eldest son of King Jaehaerys I Targaryen. However, while it was assumed that Rhaenys was the second in line to the throne, Jaehaerys declared his second eldest son Baelon his heir once Rhaenys’ father died. Realizing that Rhaenys and their unborn children were being passed over for the Iron Throne, the angry Corlys Velaryon renounced his admiralty and place on King Jaehaerys’ small council, whereafter they returned to Driftmark. Rhaenys soon gave birth to their daughter Laena Velaryon in 92 AC and son Laenor Velaryon two years later. HBO revealed that House of the Dragon will begin with the Great Council of 101 AC, which means the Sea Snake will still be quite angry with the Targaryens when the character is first introduced.

Related: House Of The Dragon Will Change The Way You See The Starks

What Happens To Corlys Velaryon In House Of The Dragon

Corlys Velaryon’s House of the Dragon story will truly begin when he and his wife, Rhaenys, prepare for the Great Council of 101 AC, which will see thousands of Westerosi lords discuss who should be the successor to old King Jaehaerys I Targaryen. When the succession was first revealed to be unclear after Baelon’s death, King’s Landing received reports that Corlys was gathering ships in order to defend the claim of his 7-year-old son, Laenor. The Sea Snake and Rhaenys then traveled to Harrenhal to attend the Great Council, where the lords once again passed over Rhaenys and her daughter Laena on account of them being women, thus establishing the male preference for the Iron Throne’s succession. However, Corlys and Rhaenys then fought even harder for the claim of their son, with the Sea Snake’s wealth and famed accomplishments growing enough support to make Laenor one of the two finalists with the best claims to the Iron Throne. Ultimately, this wasn’t enough, as Baelon’s son Viserys Targaryen (Paddy Considine) received the most votes and became the Prince of Dragonstone.

Once Viserys became king, it was suggested that he take Laena Velaryon as his wife in order to heal wounds between the families, but the ruler instead chose to marry House of the Dragon’s Alicent Hightower. After being spurned a third time, Corlys and Rhaenys refused to attend the wedding of Viserys to his second wife. Corlys then made an alliance with the king’s mischievous brother Daemon Targaryen, who would later marry his daughter Laena. However, before this marriage, Viserys betrothed his eldest daughter and heir Rhaenyra to Corlys’ son Laenor, thus finally repairing the rift between the two houses. Rhaenyra and Laenor would have three sons together (though they were rumored to be fathered by Harwin Strong) while Daemon and Laena would have two daughters, though both of Corlys’ children would die in 120 AC.

When the Dance of the Dragons begins in 129 AC, Corlys Velaryon will support the claim of House of the Dragon’s Rhaenyra Targaryen, being the greatest lord on her council and strength in her army. When Rhaenyra and Laenor’s son Lucerys died in the fighting, command of her army was given to Corlys and Rhaenys, with the Velaryon taking to the sea while the Targaryen took to the sky with her dragon. After Rhaenys’ death, Corlys was named Hand of the Queen, whereafter the lord soon found Laenor’s alleged bastards Addam and Alyn of Hull, though they were heavily implied to be fathered by Corlys himself. Corlys had the Iron Throne-sitting Rhaenyra Targaryen legitimize the two as Velaryons after Addam proved himself a talented dragonrider, but still sent Addam to be arrested once two other “dragonseeds” had proven traitorous. Corlys warned Addam and aided his escape, which led to the Sea Snake being confined to the dungeons in his stead.

After Rhaenyra’s death, Corlys was offered a pardon by Queen Alicent, though the Sea Snake suggested Rhaenyra’s supporters be pardoned and that Aegon II’s daughter marry Rhaenyra’s son Aegon III in order to establish peace. Aegon II refused, leading Corlys to plot to end the war, with the king soon being poisoned and Aegon III ascending the Iron Throne. Aegon III Targaryen, known as the Broken King, would soon help spare Corlys Velaryon from the wrath of Lord Cregan Stark, who was intent on arresting and executing traitors to both sides of House of the Dragon’s war. Corlys Velaryon would serve as one of Aegon’s regents from 131 AC until his death in 132 AC, which saw him die a rare death of old age at 79.

Related: House Of The Dragon Will Finally Put A GOT Dany Misconception To Rest

All of the power and prestige that Corlys Velaryon holds in House of the Dragon was achieved through his exploits during the Nine Voyages, but the HBO series isn’t apt to depict any of these adventures onscreen. The Sea Snake is one of HBO’s Game of Thrones prequels in early development, with the Corlys Velaryon origin story being one of those that is furthest along in the creative process – aside from House of the Dragon. The prequel-to-the-prequel was originally developed under the title The Nine Voyages, revealing that the story would, in fact, document Corlys’ most exciting adventures that made him the highly reputable man he is in House of the Dragon. George R.R. Martin confirmed in March 2022 that a pilot script for The Sea Snake was already being written by Bruno Heller and the title was changed to avoid confusion with another Game of Thrones prequel in development, Ten Thousand Ships.

With The Sea Snake being one of the most highly anticipated Game of Thrones spinoffs, House of the Dragon isn’t apt to give away too much of the action on-screen. Rather, viewers can expect House of the Dragon to feature verbal references to the broad strokes of Corlys Velaryon’s exciting backstory, giving just enough teases of the discoveries he made, his record-breaking travels, and treasures he returned with, such as the elephants that Cersei mentioned in Game of Thrones. Since Jon Snow is the Stark getting a spinoff from Game of Thrones, Corlys Velaryon’s Sea Snake series can be seen as a replacement for the highly requested Arya Stark pirate sequel show. Should Corlys Velaryon be well received in House of the Dragon, it can be expected that HBO’s Sea Snake show will move forward and finally depict his best exploits on screen.

The Steel Alchemist: what distinguishes alkagestria?