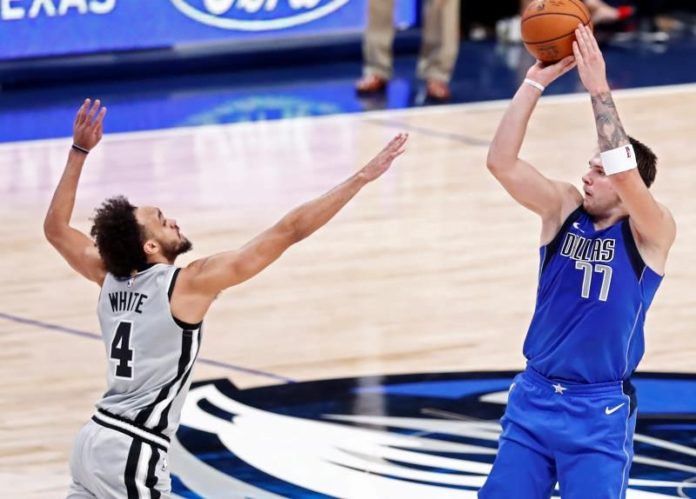 The Slovenian-based genius Luka Doncic allowed the Dallas Mavericks to be protagonists again in the NBA day and, with their home win against Los Angeles Lakers, consolidate as an elite team in the league.

While Los Angeles Clippers showed their offensive power, as did the Toronto Raptors, which allowed them to win two wins with historic scoring marks.

Doncic returned to be the great figure of the Mavericks, this time in the untouchable enclosure of the Staples Center, where he contributed a double-double of 27 points, 10 assists and nine rebounds with which he led his team to the victory by 100-114 against the Lakers, who saw a streak of 10 consecutive wins broken.

The former Real Madrid player, who won the individual duel to the forward LeBron James, returned to be the leader of the Mavericks during the 33 minutes he was on the field.

Doncic scored 10 of 23 field shots, including 4 of 10 triples, and hit 3-3 from the personnel line, in addition to recovering three balls and losing another seven, his only weak point in the game.

Alongside Doncic, who stayed at the gates of his eighth triple-double of the season, four other Mavericks players had double-digit numbers.

The victory allows the Mavericks to score 13-6 and tie in the leadership of the Southwest Division with the Houston Rockets, who had a rest day.

Power forward Anthony Davis contributed a double-double of 27 points, 10 rebounds, two assists and two blocks that left him as leader of the Lakers attack (17-3), who saw his best winning streak since 2009 broken, but still leading leaders in the Pacific Division and the Western Conference.

Together with Davis, James scored 25 points, nine rebounds, eight assists, recovered four balls and lost six, which cost him to be overcome by Doncic in the individual duel between the two players fighting for the Most Valuable Player (MVP) award When the season ends.

The Lakers had won six straight games for the Mavericks, but neither team looks much like their squads in the last few seasons.

After a year of impressive movements from both franchises, the Mavericks and the Lakers have placed themselves in the group of the best teams in the NBA.

Eaves Kawhi Leonard and Paul George contributed 34 and 31 points, respectively, and led the overwhelming Clippers attack that beat the Washington Wizards 150-125, and established their best franchise mark at the Staples Center (12-1).

The Clippers, so far this season, have managed to score 150 points in two games. The previous one was against the Atlanta Hawks, last month (150-101)

The 12 consecutive losses the Wizards have suffered from visitors to the Clippers is the second worst streak in the history of the Washington team.

Cameroonian power forward Paskal Siakam contributed 35 points that left him at the head of the balanced attack and winner of the Raptors who beat the Utah Jazz by beating 130-110 and remain undefeated in their Scotiabank Arena field.

Along with Siakam, six other players, including four remaining starters, finished the game with double-digit numbers and the Raptors now have a perfect 9-0 home mark.

The Raptors (15-4) left the game sentenced in the first half that ended with a partial 77-37, the biggest halftime advantage in the team’s history, the biggest in the NBA this season and tied for eighth in the history of the league.

Slovenian baseman Goran Dragic and bodyguard Jimmy Butler scored 24 and 20 points, respectively, as leaders of the Miami Heat attack who completed a comeback against the Brooklyn Nets who beat home 106-109.

The center Bam Adebayo also stood out as a leader in the internal game of the Heat to get a double-double of 17 points and 16 rebounds that helped the victory of the Miami team, which is placed with a 14-5 mark and is a leader in the Southeast Division.

The base Spencer Dinwiddie contributed 29 points as leader of the Nets (10-10), while forward Joe Harris finished with 25 points, his best mark of the season, which in the end could not prevent the defeat of the Nets, which followed with the loss of the star base Kyrie Irving that he lost the ninth consecutive game due to the injury he suffers in the right shoulder.

The Giants announced that Tim Lincecum’s wife, Kristin, has died