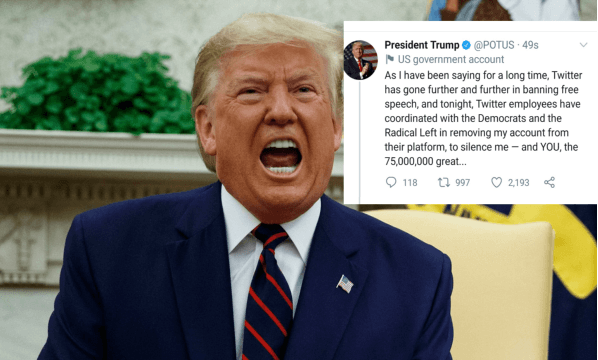 The president of the United States, Donald Trump, spoke after the suspension of his Twitter account, is he planning his own social network?

US President Donald Trump attempted to respond to his personal ban on Twitter via the official identifier @POTUS, insisting that he would not be “silenced” minutes before the posts were immediately removed from the site.

The president took to his government’s Twitter account on Friday, hours after the platform permanently banned his personal username @realDonaldTrump, criticizing the social media site for restricting freedom of expression while promoting the ideology of the “left wing. radical”.

“As I have long said, Twitter has gone further and further in banning free speech, and tonight, Twitter employees have coordinated with Democrats and the radical left to remove my account from their platform, to silence me and YOU, the 75,000,000 great patriots who voted for me, ”Trump said.

Outgoing President Donald Trump’s series of tweets were documented by netizens before they were deleted by Twitter.

“We will not be silenced!” Twitter is not about FREE SPEECH. It’s about promoting a radical left-wing platform where some of the world’s most vicious people can speak freely, ”Trump wrote.

A copy of the same statement was also sent to the White House press group moments after Trump’s short thread was posted on Twitter.

Does Trump enlist his own social network?

Telling his followers to “stay tuned,” Trump also hinted that he would be releasing a “big announcement” soon, adding that his team is negotiating with “several other sites” to move to, and that he was even considering building his own platform in the future.

While he didn’t specify what other sites he had in mind, the comment came after Fox News’s Sean Hannity suggested Trump had created an account on the conservative-friendly Parler platform, which in turn was punished with a ban on Google’s Play Store on Friday for its lax content surveillance.

Trump returns, on the @POTUS account, and says he is looking "at the possibilities of building out our own platform in the near future." pic.twitter.com/AhbICQ82OM

A coronavirus died in a plane in the USA