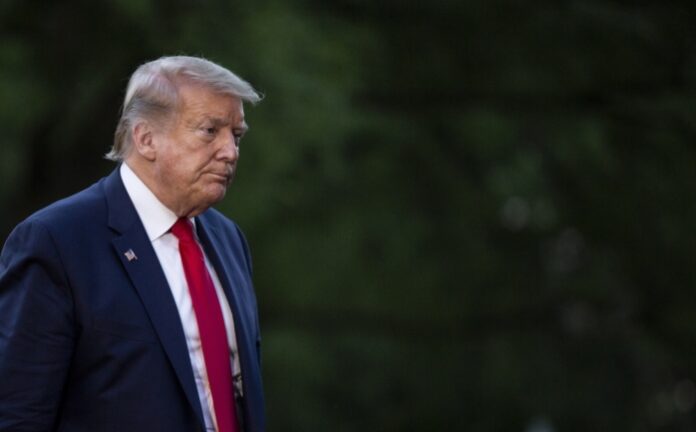 Donald Trump explains why it cost him to go down a ramp.

“The ramp I went down after my West Point speech was very long and steep, had no handrails and, most importantly, was very slippery.” This is how the President of the United States defended himself. On social media, the video of Donald Trump fighting for a ramp at the end of a demonstration went viral, in addition to the head of state having some difficulties during the speech.

“The last thing he was going to do was ‘drop’ for Fake News to have fun,” added the president on Twitter.

The ramp that I descended after my West Point Commencement speech was very long & steep, had no handrail and, most importantly, was very slippery. The last thing I was going to do is “fall” for the Fake News to have fun with. Final ten feet I ran down to level ground. Momentum!

According to a report by the French news agency AFP, during his speech at the West Point Military Academy near New York, Donald Trump had to hold a glass with both hands – something he does frequently – and has shown difficulties pronouncing named after General Douglas MacArthur, an American hero from World War II, calling him McGarther.

At the end of the speech, the footage showed the president hesitantly descending an off-stage ramp, with small, cautious steps, leading to comments on social media about the health of the US head of state. USA Hours later, Trump used Twitter to explain that he preferred to be cautious instead of falling and giving the media a chance to ridicule him, noting that he ran the last three meters of the ramp.

The ramp “was very long and steep, had no handrails and, above all, was very slippery,” added Trump, who will turn 74 on Sunday and will face Democrat Joe Biden in the November presidential election.

Saturday’s rally in New York marks the return to the stage of Trump, who has scheduled another rally next weekend which, due to the foreseeable gathering of tens of thousands of people in a compound, health experts say is very dangerous due to the covid-19 pandemic.

“The rally is an extraordinarily dangerous initiative for the people who participate in it and for the people who can meet them or be with them later,” said the director of the Harvard Health Institute, Ashish Jha, noting that the criticism has no nothing to do with it. do with politics.

“I would say the same if Joe Biden [or democratic candidate às eleições] was planning a rally,” added the doctor.

Trump will use a 19,000-seat pavilion, which saw all events canceled in late July in Tulsa, Okla., For a campaign action in which tens of thousands of people are expected to attend. They must pre-register for assistance, in which they sign a document promising not to prosecute or hold the Trump campaign accountable if they become infected with covid-19.

By clicking the Register button, you acknowledge that there is an inherent risk of exposure to covid-19 in any public space where people are present; By participating in the rally, you and your guests voluntarily assume all risks related to exposure to covid-19 and do not hold Donald Trump’s campaign responsible for the diseases, “the document read.

According to the AP, those responsible for the campaign were reluctant to respond to repeated requests for comment on the event and on the particular issue of whether or not to wear masks, social distance or other measures to contain the spread of the new coronavirus. .