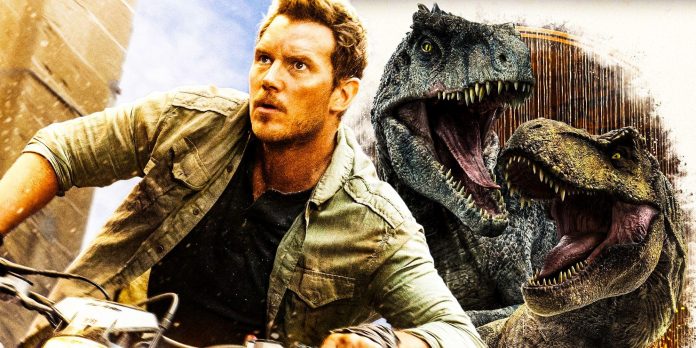 Jurassic World Dominion continued the offensive depiction of Tyrannosaurus Rex in Jurassic World. Despite the fact that dinosaurs such as Gigantosaurus and spinosaurus were certainly larger than Tyrannosaurus, this creature has a long-standing reputation as a top predator and one of the most formidable predators that ever lived. He is usually considered a dinosaur at the top of the food chain that everyone should fear and respect.

As expected, the iconic dinosaur is back in the latest installment of the Jurassic saga of six films. While the T-Rex was certainly powerful enough to pose a threat to human characters, in Jurassic World Dominion it wasn’t chasing them. Instead, his main target was a Gigantosaurus, which was portrayed as an alpha rival in his ecosystem. After the giganotosaurus refused him food (which he initially recognized as the dominant predator), the Tyrannosaurus at the end of the film opposed the almighty dinosaur. However, his strength alone was not enough to defeat him. The battle was hopeless until a Therizinosaurus arrived at the scene and pierced the beast with its claws.

Related: Explanation of the Dimetrodon of the Jurassic World Dominion (It’s NOT a Dinosaur)

The death of the Gigantosaurus in Jurassic World Dominion was a huge victory for T-Rex and Therizinosaurus, but also a repetition of the Jurassic World insult for the beloved dinosaur. In Jurassic World, T-Rex was an unlikely hero who led the fight against Indominous Rex. But despite his size and immense strength, he couldn’t defeat the creature alone and needed Owen’s predators to win. In the end, T-Rex and Blue were able to defeat him together. Instead of moving in a different direction and letting T-Rex take home all the glory this time, Jurassic World Dominion once again forced him to rely on the help of another dinosaur.

Admittedly, defeating such a massive and powerful creature as a gigantosaurus would be too difficult for any dinosaur, even if we are talking about a Tyrannosaurus Rex. It’s true that Gigantosaurus will always have an advantage in terms of brute force. But even though it would certainly be an uphill battle in which the gigantosaurus would be heavily favored, it would not be impossible for the loser to snatch the victory and deliver a fatal blow. But, as with the Jurassic World finale, the franchise decided to remind viewers that the Tyrannosaurus is actually not the strongest terrestrial predator on Earth.

By combining Therizinosaurus with Tyrannosaurus in the final battle of the Dominion and giving the former the opportunity to kill, the film paid off in an unforgettable way the formidable debut of the clawed dinosaur in the swamp scene. But as exciting as it was, unfortunately, the moment of Therizosaurus’ breakthrough came at the expense of the franchise’s most important dinosaur. Letting T-Rex win unaided would be a great way to avenge not only his inability to prove his dominance over Indominous Rex in Jurassic World, but also the humiliation he suffered at the hands of Gigantosaurus earlier in Jurassic World Dominion.

Microsoft Uses Dev Kits In Its Halo Infinite Championship Due To...