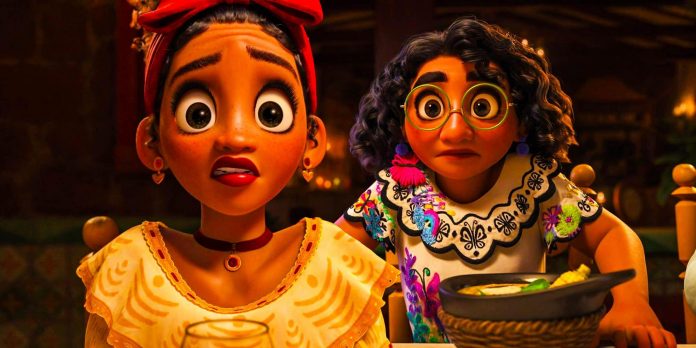 There is no bad guy in Disney’s Encanto, which tells the story of magical Madrigals, but one theory suggests that Dolores has been a secret villain all along. Mirabelle Madrigal (Stephanie Beatrice) is the only member of the Madrigal family in Encanto who has not received a magical gift. Unfortunately, this complicates her relationship with Abuela Alma (Maria Cecilia Botero). Alma is afraid of losing the miracle and letting down her family and village, so she doesn’t always treat Mirabelle well. However, when the family’s magical home begins to crack, Mirabelle’s lack of strength forces her to find a solution and make her family proud.

Although Mirabelle has no gift, the rest of her family members receive various abilities. For example, Mirabelle’s perfect sister Isabela (Diane Guerrero) can create flowers and plants that delight the village. In addition, Mirabelle’s cousin Dolores (Adassa) has superhuman hearing and knows all the gossip of the city. Even Mirabelle’s mysterious uncle Bruno (John Leguizamo) has the gift of predicting the future. However, Bruno’s visions are mostly bad, which causes a number of problems for the family. For example, Pepa Madrigal (Carolina Gaitan) can control the weather, and Bruno’s prediction of rain on her wedding day turns the day into a hurricane.

Although in Encanto does not have a traditional villain, one theory says that Dolores may be the secret antagonist of the film. According to fan theory (via Reddit), Dolores wants her family to lose their powers. After all, the gift of super-hearing is not necessarily as useful as increased strength or instantaneous plant life. Like Mirabelle, Dolores is also overlooked in her family. In addition, Dolores loves Mariano (Maluma), but he is engaged to Isabella and does not notice Dolores when her perfect cousin is around. However, if Isabela didn’t have Encanto’s abilities, it could have made a difference. That’s why Dolores doesn’t say anything about Bruno’s current residence within the walls of the house and immediately reports that Mirabelle appears in a vision where Casita is falling apart. She probably heard Bruno talking about his vision earlier and wants the family to lose the miracle. The destruction of Isabela’s engagement to Mariano is just the cherry on the cake.

Why Dolores Can Really Be an Encanto Villain

There are good reasons to believe that Dolores would not want the family to have authority. Her brother Camilo (Renzi Feliz) constantly changes shape to play jokes, and her mother makes storms whenever she gets emotional. In addition, super-hearing means that Dolores does not handle loud noises well, and she probably heard a lot of difficult conversations that she would prefer to avoid. In the film, Dolores is not portrayed actively trying to sabotage her family, but it is clear why she does it. Mirabelle does not receive gifts, and Dolores would be quite happy if the rest of the family were in the same position.

But calling Dolores a villain is not exactly what you need. Dolores is overlooked, as is Mirabelle, and she secretly longs for Mariano, but in the film she doesn’t seem to do anything with malicious intent. And although Dolores thinks she hears Bruno, she doesn’t know for sure. At the end of the movie, it seems that she even confirmed Bruno’s appearance, which at least is proof that she didn’t hear the rats talking in the walls. So she’s not the real villain in Encanto, but that doesn’t mean she’ll be heartbroken if the family’s power disappears.

Why the Absence of a Real Encanto Villain Makes It Better

Not only that, Dolores isn’t really the secret villain in Encanto, but the fact that there is no villain in Encanto is actually one of the best qualities of the film. Ultimately, Encanto is not a simple story about good and evil, but a story about the nuances of the problems of uniting a family consisting of several generations, and the importance of valuing everyone, regardless of their unique contribution to the world. This type of story has never needed an identifiable antagonist – instead, Encanto’s story is elevated by a series of complex and well-crafted characters who appear to be real people (except for the ability to talk to animals). Abuela, Dolores and the rest of the madrigals fit this description perfectly, because they have significant motives, fears and shortcomings, but at the same time they do not fixate on one note and do not sacrifice the stakes of the story. Encanto offers a touching and relevant message for all ages, and by not having a real villain, it’s a stronger representation of the dynamics of a real relationship that is effective, deceptively layered and understandable.

Strange new Worlds Ignoring the Enterprise 2 Team is the only...