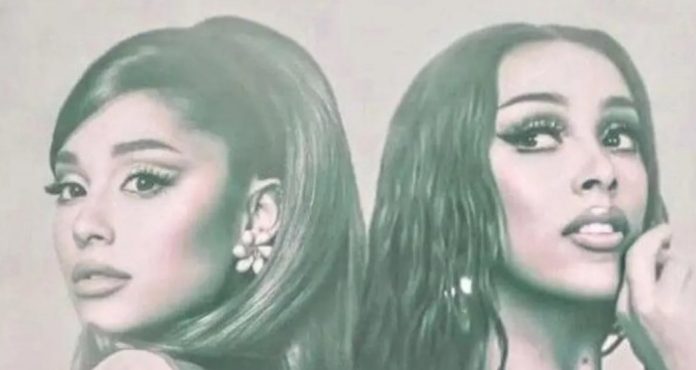 After their musical collaboration, the rapper proved that she could be the lost sister of Ariana Grande with this imitation. Doja Cat becomes the new Ariana Grande, the rapper demonstrated her acting skills to transform into the singer.

The “Florida” native is one of the most powerful female stars in music, has broken records on platforms and is one of the most followed figures on social media. Her career as an ale has allowed her to impose fashion trends thanks to her style and Doja Cat became one of her imitators.

Through her personal Instagram account, Doja Cat made a live broadcast where she showed her abilities to transform into Ariana Grande , the rapper managed to imitate from her poses and her way of speaking, this after both collaborated on her new song”34 + 35″.

It is not the first time that Ariana has been imitated by someone else, there is an influencer who looks a lot like her and recreates from her ponytail, her way of dressing and her selfies. Apparently, the musical duo developed a friendship while working on their remix and the rapper missed no chance to show that she knows her very well.

During her live broadcast, Doja Cat decided to show her talents as an actress, despite having a hippie-style wig and blouse, the singer began to sweeten her voice to show that she can be Ariana Grande’s double .

The imitation was not only based on her way of speaking or her most iconic phrases, it also showed that her facial features bear a slight resemblance to Grande, as her nose, eyes and smile were her best weapon when posing as her. Doja Cat had fun with her fans, who asked her to act like other celebrities too.

So far, Ariana Grande has not responded to Doja Cat’s performance, But the joke is synonymous with the fact that the two get along very well and their relationship goes beyond the professional, the singer is a role model for her fans, fashion and the generations who knew her as “Cat”.

The two female stars showed all their power in the remix of “34 + 35”, Doja Cat starred in the rap in this collaboration with Ariana Grande.