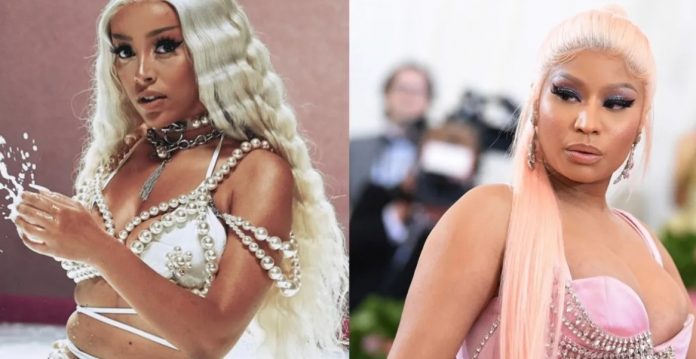 In 2007, Nicki Minaj had her first steps in the music industry, a young rapper who promised a lot, appeared to the world showing her talents, little by little the fame of this rapper has grown and over time she has enchanted us with many of her successes; climbing in the most important music tops, winning thousands of awards and conquering the hearts of many fans.

Sometime later we met Doja Cat, who was actually inspired by Nicki for her music, a young rapper uploaded her songs to Soundcloud with the idea of ​​showing all her creativity and originality for rap around the world; Since 2019, Doja has become very important in the music industry and today it is one of the most listened to artists worldwide.

‘Say So’ is a song by Doja Cat that gained great popularity thanks to the fact that it became a trend on Tiktok and with which she was able to fulfill one of her biggest dreams by collaborating for a remix of this track with one of the most popular artists. admired, Nicki Minaj.

Doja Cat and Nicki Minaj released a remix of ‘Say So’ together, on May 1, 2020, we could hear a new version of the already popular track; It quickly became popular as Nicki’s rap gave a new twist to this composition.

The remix of ‘Say So’, reached the Billboard Hot 100, the most important list in music, and was at # 1, thus, Nicki and Doja made music history by being the first rapper duo to reach # 1 of Billboard HOT 100 in all history.

WHY DID DOJA CAT COLLABORATE WITH NICKI MINAJ?

Doja has mentioned that Nicki Minaj was one of her influences for music and there is nothing like collaborating with your favorite artists, even if there is some competition within the music industry, rappers show mutual respect and love; even on a new Doja Cat track, ‘Get Into It’, the singer mentions that she loves Nicki.

This is how Doja Cat not only collaborated with someone that she really admired a lot but also managed to make history with her and these are the moments in music that we love; Let’s continue enjoying our favorite artists and supporting them without measure.

In other news, another amazing singer who has also collaborated with Doja is Ariana Grande, do you know her most iconic songs? They have all been a success.