Ethereum (ETH) price has been able to move upwards in recent days, following the rise in Bitcoin, reaching $ 435, rising 8%. However, one of the cryptocurrency analytics companies shared that the social interaction seen for Ethereum is also on the rise.

Ethereum (ETH) also found a bullish area for itself as the Bitcoin price approached the $ 16,000 level. It was shared by an analysis firm that social interaction with Ethereum also increased as the price increased. The analysis company LunarCrush has published 1-day social interaction statistics of Ethereum.

Ethereum 2.0 news has a big impact

A comment was made that the transition to Ethereum 2.0 in Cryptopotato will continue this rise. On November 4, Ethereum co-founder Vitalik Buterin announced that ETH 2.0 would launch on December 1, 2020. After this news, a data showing that at least 524,288 ETH and 16,384 authenticators are needed to broadcast the mainnet on ETH 2.0 Launchpad was shared. 33,413 ETH deposited so far.

According to newsbtc’s Aayush Jindal, ETH is ready for a new rally and could go up to $ 465. Jindal argued that Ethereum is following the rise seen in Bitcoin, saying that $ 435 is the first resistance point and the biggest hurdle will be seen near $ 440. He added that if ETH manages to surpass $ 440, Ethereum could easily test $ 450, then rise to $ 465.

It is also reported that if Ethereum cannot overcome the resistance points in front of it, it may decrease to the $ 400 support zone. Ethereum is currently trading at $ 435.11, according to data from CoinGecko. The rate of increase seen in the last 24 hours is 8%. 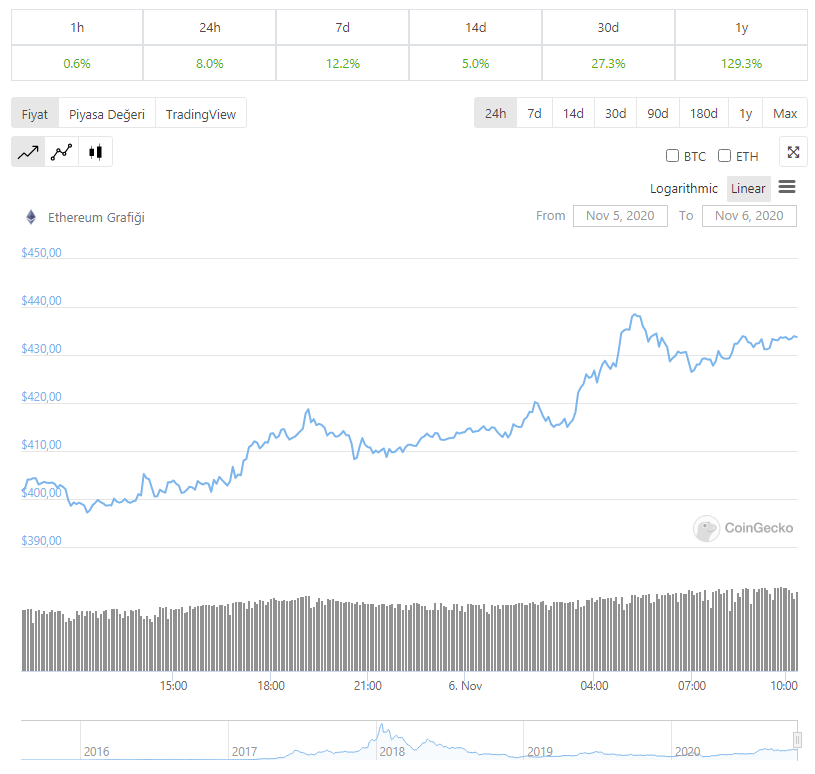 Taylor Swift: What songs did Joe Alwyn write for Folklore?

Learn about Mark Lee’s story and celebrate his birthday

Time is approaching for the Harmony OS operating system!

Genshin Impact 1.1: all the changes and news of the patch

The first country where the Covid-19 outbreak will end