Home Tech Doctor Strange 2 Trailer: Wanda and Wong Teamed up with a New... 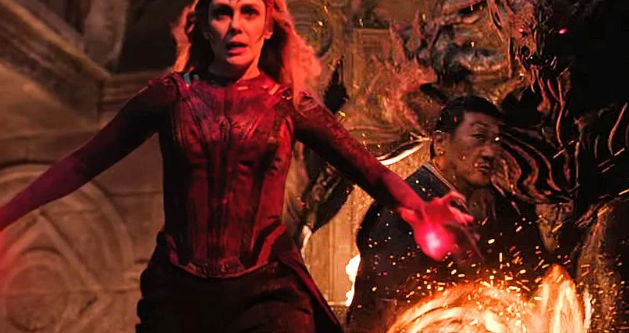 Marvel presents a new advertisement for “Doctor Strange in the multiverse of Madness”, in which Wong and the Scarlet Witch fight together with an unknown creature.

The new “Doctor Strange in the Multiverse of Madness” video tells about a new monster joining the battle. The film, which will be released in theaters on May 6, 2022, will be the first full-length Marvel project of 2022 after the success of the 2021 film “Spider-Man: There is No Way Home,” which had record box office receipts. on the 3rd place in the chart of the highest-grossing domestic films of all time. The film, which is more of a horror story, is directed by Sam Raimi, making his first film for the MCU, although he previously dabbled in Marvel comics with his iconic Spider-Man trilogy, which began in 2002.

“Doctor Strange: The Multiverse of Madness” will tell about Doctor Strange (Benedict Cumberbatch) and the consequences of the events of “There is no Way home” when the multiverse began to open. A new villain will emerge from a fractured universe as Strange faces a host of multiverse challenges, including an evil version of himself. To fight these unusual new enemies, he will enlist the support of old friends Wong (Benedict Wong) and Wanda (Elizabeth Olsen), the latter of whom was last seen in the Disney+ series “Vandavision”, along with a new character America Chavez, played by Sochitl Gomez. .

Now Marvel Studios has shared a new 30-second commercial for “Doctor Strange in the Multiverse of Madness.” After some familiar footage from previous teasers, including Doctor Strange enlisting the support of Wanda, the teaser shows a completely new scene from the film. In the tantalizing footage, Wanda and Wong are fighting on the same side with a new computer monster that has not been seen in the MCU before. Check out the teaser below:

A monster is not necessarily a rarity in the MCU. Indeed, it was only in Phase 4 that several CGI creatures threatened various Marvel heroes. The most striking example, of course, are Deviants, mutant creatures from whom the Eternals have sworn to protect the Earth. However, the first episode of Moon Knight, which premiered last Wednesday, also featured two monstrous creatures taken straight from Egyptian mythology. However, the creature depicted in this clip from Doctor Strange in the Multiverse of Madness does not seem to belong to either of these two categories. Whether this is a new being born from an already existing world, or something that came from an alternate timeline of the multiverse, remains unknown.

Nevertheless, this is an extremely unusual union that is very intriguing, especially with the participation of the Scarlet Witch. There are rumors about the role of Wanda Maximoff in Doctor Strange in the multiverse of Madness, and although this clip certainly gives the impression that she will be on the side of Wong and Strange, how this will happen is still unknown. As Marvel usually does, perhaps they are hiding the real villain of the Doctor Strange sequel, and their trailers are especially deceptive, and this latest clip is another proof that not everything is as it seems.