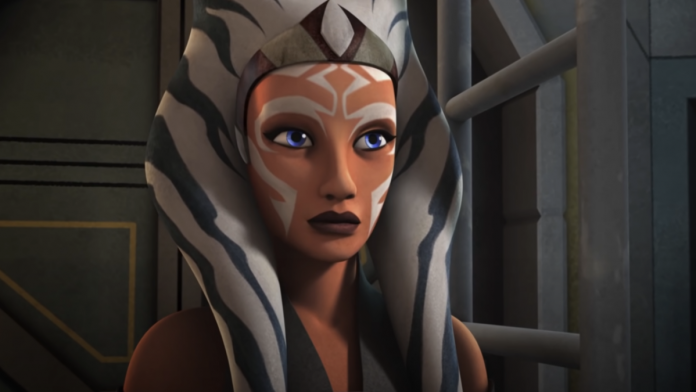 The galaxy far, far away just keeps getting bigger thanks to Disney+, and one of the most highly-anticipated upcoming Star Wars projects is the live-action Ahsoka Tano series that will star Rosario Dawson. The character already has a rich animated history after her role in Star Wars: The Clone Wars and Star Wars Rebels, and The Mandalorian Season 2 revealed that she has an important mission on her mind after the fall of the Empire. So, do Star Wars fans need to go the extra mile and watch Rebels before Ahsoka? Ashley Eckstein, who has voiced the fan-favorite character in animated projects since 2008, weighed in with her thoughts.

Ahsoka’s reveal in The Mandalorian that she’s hunting Grand Admiral Thrawn was a thrill for pretty much any Star Wars fan who has heard that villain’s name, but Rebels viewers already knew all about her having reasons to chase Thrawn across the galaxy. Plus, announcements at the 2022 Star Wars Celebration event officially confirmed that Rebels character Sabine Wren will be part of the cast (with Natashia Liu Bordizzo landing the role), and others from the animated show are expected to appear as well.

Speaking with CinemaBlend ahead of the Her Universe Fashion Show at San Diego Comic-Con, Ashley Eckstein shared her perspective when asked if she would recommend watching Rebels ahead of Ahsoka:

Before the Ahsoka series comes out next year, you definitely want to watch Clone Wars and Star Wars Rebels. It’s so important for her storyline and will make the Ahsoka series so much more impactful, because the live-action series are incorporating so much of animation into their storylines – even if it’s just the backstory – that if you don’t watch the animated shows, you’re really missing out.

In earlier years, shows like The Clone Wars and Rebels were more supplementary to the films rather than overlapping with them, with the exception of moments like Ashley Eckstein and another Rebels alum making voice cameos at the end of Star Wars – Episode IX: The Rise of Skywalker. With the advent of the live-action shows that are expanding the Star Wars universe, the animated characters and storylines are essential for getting the full picture, and that’s especially true for Ahsoka.

After all, the very premise of the show makes it sound like a Rebels sequel series that happens to be in live-action, with Ahsoka hunting Thrawn. Ahsoka has had a part to play in two animated series and now two live-action series after appearing in The Mandalorian and The Book of Boba Fett ahead of her solo series, and the animated background is already important. Eckstein continued:

Specifically speaking to Star Wars Rebels, you’re missing out on two things: Ahsoka’s role in the founding of the Rebellion and then also her tragic relationship with Darth Vader and Anakin Skywalker. The Season 2 finale, ‘Twilight of the Apprentice,’ I think will forever go down as one of the greatest episodes of Star Wars that’s been created. It’s truly a beautiful story showcasing a beautifully tragic relationship between Ahsoka and Anakin, especially with the slashing of the helmet. I think fans are really missing out if they don’t go back and watch not only Star Wars: The Clone Wars but also Star Wars Rebels.

I won’t delve into spoilers here for any who haven’t checked out Rebels yet, but the two-part Season 2 finale – called “Twilight of the Apprentice” – has always been a big part of why I recommend the series to viewers, whether or not they’ve already seen The Clone Wars. There’s even a moment involving Ahsoka that parallels a key moment between Obi-Wan and Vader in the Obi-Wan Kenobi series finale. When I noted that “Twilight of the Apprentice” is an incredibly cinematic finale, Eckstein responded:

The finale episodes are always cinematic. It goes back to, I would say, the Season 5 finale of Star Wars: The Clone Wars, and then the Season 7 finale, series finale, Siege of Mandalore for The Clone Wars, which all four episodes should really be watched as a movie. They’re truly incredible. And then, you know, the Season 2 finale, ‘Twilight of the Apprentice’ for Rebels and even the series finale for Star Wars Rebels – they’re movies in themselves and really deserve to be watched on the big screen if you ever have the chance.

The “Siege of Mandalore” arc as the finale of The Clone Wars was a very long time coming after the show’s initial cancellation before returning on Disney+, and Eckstein shared earlier this year that she thinks it “only gets better” for her the more times that she watches it. It was also the last chronological time that Ahsoka appeared in the saga until Rebels, where she would have a key role in establishing the Rebellion in the final years before the original trilogy. Ashley Eckstein continued:

The entire team – I’ve always said that I’m just one part of a giant team of people that it takes to bring the character of Ahsoka together and the shows together. So that’s why I call it Team Tano. Because I never want to take credit for what multiple people have worked so hard to do. It takes every element. It takes not only the writing, and the animation, the directing, the voice acting, the lighting, everything it takes, and even the producing on the back end, the things that you don’t see to make these things happen. They’re truly works of art, and they should be celebrated.

The good news for any fans who still need to check out Star Wars Rebels is that there is still time, as Ahsoka isn’t slated to premiere until 2023. All four seasons are available streaming with a Disney+ subscription as well, along with all seven seasons of The Clone Wars. The next live-action Star Wars series on the way to Disney+ (opens in new tab) is Andor, the Rogue One prequel series starring Diego Luna that will debut on August 31.

Ashley Eckstein is also keeping busy, as she prepares to host the Her Universe Fashion Show in its long-awaited return to an in-person event at San Diego Comic-Con. RuPaul’s Drag Race alum Nina West will co-host with her on July 21. You can also check out Eckstein’s most recent Star Wars project with the Star Wars Mindful Matters series, available streaming for free now.

Apple is Making a new HomePod, But It’s Not a sequel...