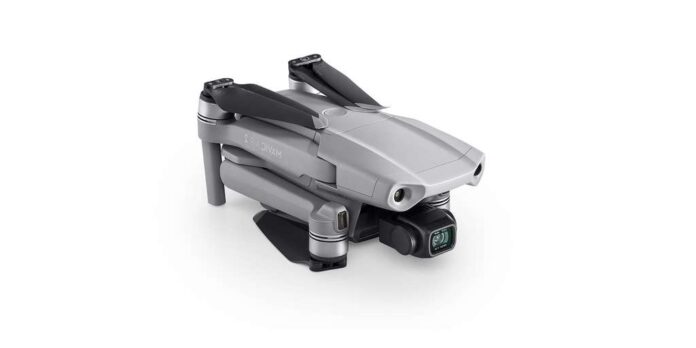 Futura was able to test the DJI Mavic Air 2 which was released a few weeks ago. The first impressions when this recreational drone was discovered were confirmed after numerous test flights. The light aircraft has enough to dominate the market for quite some time.

On paper, when its release was announced, the Mavic Air 2 had left Futura with the impression of a drone so inspired by DJI’s pro models that it could well become the reference drone for the general public. While the author of these lines is used to and certified in remote piloting of professional drones, this impression was confirmed by testing the Mavic Air 2 for two weeks. The replacement for the Mavic Air no longer plays in the same yard at all. It evolves in the air practically as well as a professional drone and delivers images which approach it. Difficult to criticize this drone for beginners. He will immediately put them in confidence with his anti-collision systems. This arsenal inflates the price, but it effectively allows to start without risking the destruction of the drone from the first turns of propellers. The lover of beautiful images will appreciate the programmed evolution modes and a quality very close to professional models.

On the design side, as Futura had already mentioned, the device takes up the aesthetics of the Mavic 2 with the same architecture as regards the folding arms. It is simply smaller, which allows it to be held in the hand when folded. Its weight of 570 grams does not require passing the free training on Alphatango. This is compulsory for leisure drones weighing more than 800 grams. On this point, we really stay in the universe of the leisure drone …

Its rectangular remote control is compact and the small control levers can be unscrewed to store on the front side. Practical not to damage them in a bag. The remote control does not have a visible antenna. It is integrated on the front of the retractable telephone holder. This gives access to the connection cable which is connected and stored inside. This system is very convenient because it is difficult to lose or forget this essential cable. It is with him that the mobile is connected and that we have the settings and the video feedback via the DJI Fly app. The only problem is that the clamp of the support tends to press the volume or shutdown buttons on the mobile.

The remote control incorporates the new proprietary Ocusync 2.0 wireless link. According to DJI, it remains stable and its range is 6 km. A distance that we obviously can not advise while it is mandatory to keep the view of the drone during evolutions. For example, in classic activity scenarios, a professional remote pilot does not move the aircraft more than 200 meters away from an unpopulated area and 100 meters from a populated area. In terms of height, remember that the maximum altitude remains 150 meters and often less close to urban areas. Better not to try the devil, even if the aircraft has a return to take-off system.

During the flight tests, the small drone impressed by its stability despite its low mass. The rotors and stabilizers do more than their job properly while the drone remains unmoved by maintaining its hover in the event of a gust. The device is nervous and swings when necessary and in particular by using the sport mode proposed on the remote control. From the piloting point of view, the Mavic Air 2 does not really differ from a professional drone. Similarly, compared to the latter, the model tested impressed with the speed with which it manages to hang a sufficient number of satellites to ensure its geolocation.

The video feedback via the DJI Fly app is of very good quality and practically without latency. Obviously, it is strongly advised not to pilot the drone via this video feedback. In addition to being strictly prohibited, this slows the progression of the handling of a drone. And on this last point, the Mavic Air 2 has really been strong.

The device is loaded with proximity sensors found on professional models. As a result, the risk of collision is very limited. Only the side and top sensors of the drone are missing. For a regular, this absence allows to sneak the drone between obstacles laterally. The application is certainly simplified, but it offers most of the automated shooting modes found with other more advanced models. These QuickShots are six in number and deliver spectacular sequences automatically.

For the pictures, again, the Mavic Air 2 seems to do as well as some of the pros. Its optics equivalent to a 24 mm (f / 2.8) houses a ½ Cmos sensor. It is capable of taking 12 or 48 megapixel shots. During our tests, the best results were obtained in 12 megapixel mode. The camera was most impressive for the videos. It can shoot in 4K with 60 frames per second, which is better than more expensive models. However, to benefit from HDR mode, you must limit the number of images to 30 per second. The result is very convincing, even without adjustments.

Question autonomy, the manufacturer claims that the Mavic Air 2 can stay in the air for up to 34 minutes. A duration practically impossible to wait without completely draining the battery. With these drones, it is better not to go below 20% of autonomy, for safety, but also to prolong the longevity of the battery. During our tests, we respected this rule and the flight time exceeded 25 minutes, which is already very good for a drone of this category.

It is clear that with its price of 849 euros, the Mavic Air 2 is not cheap. But at this price, the drone outperforms any other leisure model with its anti-collision sensors, its stability, the quality of its images and its very simple handling for a beginner. It is so close to professional drones that it could almost be one of them.

DJI unveils its new consumer drone, the Mavic Air 2. The replacement for the Mavic Air is reassuring for beginners because of its assistance from the professional range of the manufacturer.

Who can do more, benefits least. Appreciated for the reliability and performance of its drones among professionals, the DJI brand also makes its models intended for the general public benefit from some of its most proven technologies. This is the case with the arrival of the Mavic Air 2. The successor of the Mavic Air moves away frankly in terms of appearance, dimensions and capacities to strongly resemble the Mavic 2 Pro and Mavic 2 Zoom for professional use . Folded back, it can be held in the palm of the hand and uses the same system of arms and propellers that deploy. On the weight side, with its 570 grams, it is heavier than its predecessor, but remains below 800 grams requiring obtaining a certificate on the Alphatango website, as well as registering the aircraft.

The drone incorporates most of the obstacle sensors in the upper range, apart from the lateral and upper collision avoidance modules. It also has the Hyperlapse option which assembles the shots taken during a preprogrammed mode. Thanks to these automatisms and its sensors, the drone will forgive many piloting errors for beginners, unlike the Mavic Mini. Like the latter, it also has the ActiveTrack function and shots in preprogrammed evolutions (Rocket, Boomerang, Asteroid, Dronie, Circle, Spiral).

A video module almost at the level of the pros

The autonomy of the Mavic Air 2 increases to 34 minutes against a little over 20 for its predecessor. A figure to put into perspective, because it is not recommended to let the battery discharge below 20%. In terms of images, behind the 24 mm (f / 2.8) optics, the sensor switches to the ½ inch format with a resolution ranging from 12 to 48 pixels. In reality, each pixel has 4 photocells. As another advantage, the module can film in 4K up to 60 frames per second. It has HDR to improve the shots.

Always at the level of innovations, the Mavic Air 2 is delivered with a new radio control. More imposing, it is also more practical for fixing the smartphone and above all, it swaps the WiFi link for a radio technology called OcuSync 2.0 developed by DJI. The range would be improved and the link more reliable. For controls, settings and video feedback, instead of the DJI Go 4 application which is available for other professional drones, the lightened and simplified version, DJI Fly appeared with the Magic Air, must be downloaded on the mobile.

The drone will be available for pre-order from mid-May. The date of marketing in Europe remains unknown at this time. It is sold with its remote control and a battery at a price of 850 euros. For 1050 euros, the Fly More pack includes three batteries, ND filters, a bag and a multiple charger.