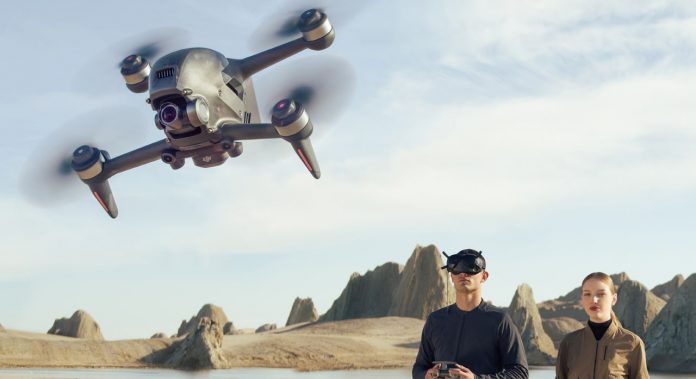 DJI, which managed to be the first brand that comes to mind when drone is mentioned, has raised the bar with its FPV model. The device, which is unlike any of the end-user products such as Phantom and Mavic in terms of design, is the first FPV to be released for the end user or the first racing drone model in the industry.

Thanks to the glasses included in the package, you can directly see the image from the drone camera. In this way, it disconnects you from the outside world and allows you to focus directly on the control of the device. Drone races are usually held with these glasses.

Of course, the DJI FPV is not only used for races. It offers three different usage modes: normal, sports and manual. While everything proceeds like a standard drone in normal mode, you can push the limits in professional sports and manual modes. Thanks to DJI O3 (OcuSync 3.0) technology, it has a long range of 10 km for image transmission.

Although it is not foldable like the Mavic series, the device, which has compact dimensions, will require registration in many countries due to its 795 gram weight. With a weight of 249 grams, DJI Mini models did not require recording in many regions. Capable of recording 4K 60 FPS video, the camera offers a 150-degree viewing angle as well as optical and DJI RockSteady electronic image stabilization technologies.

Although it comes with glasses, it is possible to start flying in a very short time by completing the installation process.

According to DJI’s statement, it can stay in the air for up to 20 minutes. However, according to the first tests, the device, which has around 15 minutes of flight time in normal mode, offers a battery time of less than 10 minutes when switched to sports or manual mode.

How much is the DJI FPV price?

The price of the starter package consisting of drone, remote controller, DJI FPV Goggles V2 goggles and battery is set at $ 1299. You can also purchase the Fly More kit, which includes two more batteries, and accessories that allow you to manipulate the device with your hand movements.

What do you think of the DJI FPV features and price? We are waiting your comments…