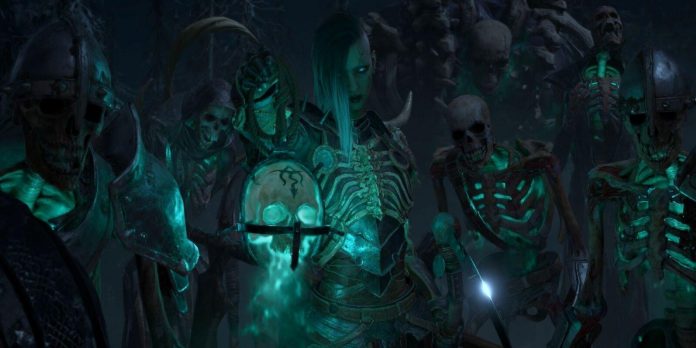 Blizzard’s Diablo 4 is still under development. The release of the game is scheduled for 2023, but, fortunately, the developer publishes information as work on the development goes on. Previously, the company gave fans an opportunity to look at the visual aspect and design of the map in the game, paying special attention to the world of Diablo 4, known as Sanctuary, and several dungeons that are under development for the game.

Blizzard recently offered to take a look at one of the game’s characters, a Necromancer. Thanks to its unique mechanics, the necromancer has become a favorite class of fans since its appearance in Diablo 2. It can also be played for in Diablo 3, Diablo Immortal, as well as in the updated version of Diablo 2: Resurrected. Thanks to the style of play revolving around minions, it gives something that other classes cannot. No wonder Blizzard decided to bring the Necromancer back to Diablo 4 as one of the five classes.

The necromancer from the previous parts of Diablo is known for powerful dark magic and reanimation of corpses. This is also true for the Necromancer version of Diablo 4. The class uses two resources: essence and corpses. The first is a form of mana that slowly regenerates automatically, and the second allows players to use the remains of fallen enemies as targets for skills.

Corpses can be used to revive Necromancer’s allies or to enhance other skills. One of the classic Necromancer abilities is the powerful “Corpse Explosion” damage skill, which is also one of the best skills in Diablo Immortal. As the name suggests, with the help of Corpse Explosion, a necromancer targets a dead body that is in close proximity to enemies. By blowing up a corpse, the Necromancer deals damage across the area to all enemies near the explosion. While there are often a lot of corpses in the Diablo world, the development team tried to add effects that can generate corpses nearby in addition to simply killing enemies. This is done so that players who rely on corpses as resources will not be left without goals.

As for weapons and other equipment not related to armor, necromancers use swords, daggers, wands, magic tricks, shields and class scythes. Some of the aforementioned Necromancer gear from Diablo 4 has already been revealed by Blizzard.

As is the case with other classes in Diablo 4, you can play for a Necromancer in different ways. Necromancer has four different top-level playing styles with different strengths and weaknesses. These are the styles of play: “Bone”, “Darkness”, “Blood” and “Army”. The first three are similar to different styles of elemental magic. A bone is a physical form of dealing damage to an enemy that also uses a lot of essence. Blizzard has brought back Bone Spirit, who took a break during Diablo 3. This skill allows the necromancer to use his entire essence to strengthen the spirit, which searches for enemies and explodes on them.

Another skill that returns to Diablo is Bone Prison, which was used by the last boss of Diablo 2, Diablo himself, to surround the players’ city portals. In Diablo 4, players can catch their enemies with this skill, which can be used in combination with other skills and effects. Not only can it create a barrier around the player in the open world of Diablo 4, but it can also be used to block narrow corridors or capture enemies with area effects. Bone’s style of play largely depends on critical hits, which not only add damage to abilities, but also reduce the recovery time of skills.

Darkness mainly depends on the effects of gradual damage, debuffs, and crowd control. Decomposition is a skill that deals damage to an opponent by restoring the player’s Essence. It also generates corpses nearby. Another discovered Darkness skill is Blight, which summons a sphere that deals damage on impact, but more importantly, creates an area that deals damage to enemies standing in it. This can be very effective against slow or stationary enemies, such as an opponent locked in a Bone Prison.

Blood magic grants damage skills that regenerate the Necromancer. By drawing life from nearby enemies with Blood Surge, you create an explosive ring of blood that deals damage around the player. The more enemy players gather around them, the more they will pump out and the more damage they will be able to inflict. This skill rewards a riskier style of play, which is achieved through higher regeneration of life points due to pumping. The second Blood skill is “Blood Mist”, a defensive skill that makes a necromancer invulnerable by drawing life from enemies. This bubble-like mechanic is likely to be very handy in both PvE and PvP environments.

Finally, there is the army. Necromancers are known for their armies of the dead; even a Necromancer from Diablo Immortal commands a group of undead soldiers.

The popular Squid Game series now has its own Funko Pop!