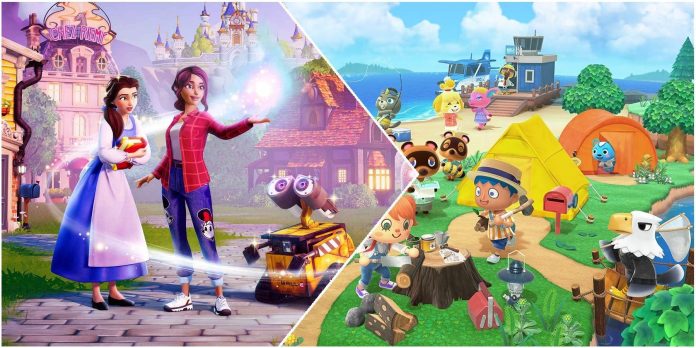 The latest cozy game that gives players the opportunity to build their own virtual city and take care of it, Disney Dreamlight Valley, makes a number of positive changes to this genre of casual games. In some ways, Disney’s latest journey into customizable Disneyland even offers a more complete and engaging game cycle that can better stimulate players during the hours that players spend in Animal Crossing.: New Horizons and similar games.

This is primarily due to how Disney Dreamlight Valley handles the revival of materials and the time to complete tasks and interact with Disney characters scattered throughout the valley. While most cozy games tend to set limits on daily activities, the Disney Dreamlight Valley world is constantly on the move and will allow players to continue farming, foraging, and even building as much as they want, with each action completed quickly.

In Disney Dreamlight Valley, the only limit to the actions a player can perform is the energy that is used every time the player performs an action. For example, going out and collecting fish that can be sold or used to cook dishes such as fish sandwiches will take a small amount off the energy meter. Thus, when this counter ends, the player cannot continue to engage in these activities. However, this energy can be restored by eating food or resting in the player character’s house.

The result of this system is that while there are limits on how much a player can mine, grow, or fish in Disney Dreamlight Valley, it can be easy to return to work in the village after a short break. This means that players won’t have to resort to sometimes game-breaking cheats, such as time travel in Animal Crossing, or fiddling with save files to get beyond the day. This means that instead, players are free to choose how much progress they want to pursue in a given game session, without the restrictions that many other handy games set to block real-time progress.

At the moment, Animal Crossing fans are well aware that these games are designed for players to come back and complete new tasks every day. To this end, the series does not so much limit players to an energy meter, as it provides a certain number of objects for interaction. In addition, actions to build new structures and collect all Animal Crossing items: New Horizons requires real-time waiting day in and day out. This helps keep players engaged in game development for several days and extends game time until new seasons and events change the environment.

This is both an advantage and a detriment to the design of Animal Crossing, since this limiting factor will keep players much longer than the 60 hours it would otherwise take to complete the “plot” of the game. By forcing players to return for short periods of time each day, this ensures that many players probably won’t see the credits before they are shown that there will be new items to collect and new characters to interact with on certain dates. In addition to the incentive to return to the game every day on the hunt to finally see K.K. The slider is executed at the end of Animal Crossing: New Horizons, it also keeps players from getting too carried away with the game. Given Nintendo’s history of promoting healthy gaming habits, this is a small surprise for the developer.

Limitations of Animal Crossing Resources: New Horizons isn’t just one game, as many other games in this genre follow this rule so that players can’t progress too fast. Another striking example is Cozy Grove, which also limits the number of interacting objects on a daily basis in order to record progress over days, weeks, or even months of returning to the island and completing available tasks. In the case of resources like gems or iron bars in Disney Dreamlight Valley, the only wait is a few minutes before the source of these items is updated on the map.

This means that players have much more freedom to set the pace of their gameplay in Disney Dreamlight Valley, either by tracking down quests as quickly as possible or by collecting all the items they can find. The energy restriction is only a short—term setback, usually prompting the player to return home, where he can take stock of everything he has collected and inspect everything he may have for an available quest. Otherwise, it’s an unlimited game cycle in which players can invest as much time as they want. However, no matter how good this limitless loop is, the incentive to overeat can lead to unhealthy habits.