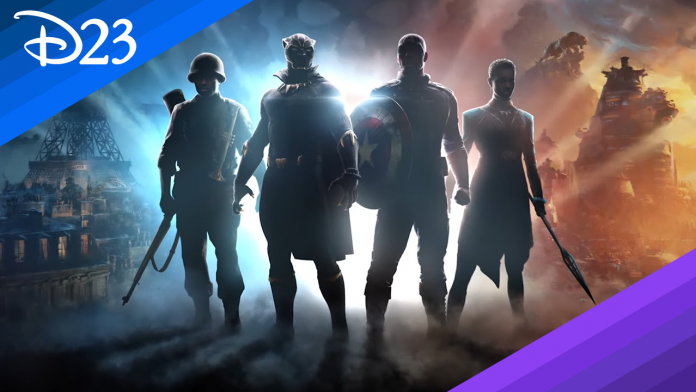 D23 2022 is home to the first ever exhibition of Disney and Marvel games, and this show gave us a glimpse into the future of Disney and Marvel games from studios around the world. From Amy Hennig’s new Marvel game starring Captain America and Black Panther to Marvel’s new take on Midnight Suns, from Mickey and his friends’ new 2D platformer to Tron: Identity, everyone will find something for themselves.

There were a lot of ads on the show, and we’ve compiled each of them below so that you don’t miss anything!

Amy Hennig and Skydance New Media’s new game with Marvel is the story of Captain America and the Black Panther, set during World War II.

Amy Hennig and Skydance New Media have announced that their upcoming narrative adventure game with Marvel Entertainment will center around Captain America and Black Panther during World War II. In the story, players will travel to Paris, Wakanda and possibly other places.

Although the game currently has no name, it promises four playable characters: “young Steve Rogers, aka Captain America; Azzuri, T’Challa’s grandfather and a World War II Black Panther; Gabriel Jones, an American soldier and a member of the Howling Commandos; and Nanali, the leader of the young Wakanda spy network.

Marvel’s Midnight Suns has a new release date, the Switch version is subject to clarification

After an indefinite delay, Marvel’s Midnight Suns has a new release date — December 2, 2022 for next-generation consoles and PCs. Unfortunately, the Switch version still has no date. Along with the news about the release date, it became known that “Midnight Suns” from Marvel will receive prequel short films starting on October 31, which are “a set of five short videos telling the backstory about the formation of the young core of Midnight Suns.”

Tron: Identity is a new visual adventure from Thomas Was Alone’s Bithell Games

Developer Thomas Was Alone from Bithell Games has unveiled Tron: Identity, a new adventure visual novel that follows Query, “a detective program tasked with solving the mystery of an unprecedented crime.” Although not much has been revealed, we know that it will be released on PC and consoles in 2023.

Disney Illusion Island is a new 2D platformer starring Mickey, Minnie, Donald and Goofy, which will be released exclusively on the Nintendo Switch in 2023. in an effort to “explore the mysterious islands of Monot and find three mystical books to save the world from disaster.” Each character also has their own unique abilities, such as Donald’s ability to swim and Goofy’s ability to use a huge bottle of condiments. Oh, and it supports online and local shared split-screen mode.

Pokemon GO developer Niantic has announced that it is partnering with Marvel Entertainment to develop Marvel World of Heroes, an augmented reality game that will allow fans to create their own superhero and team up with their favorite Marvel characters in the real world. Those interested can pre-register on the website marvelworldofheroes.com before the global launch of the game on mobile devices in 2023.

Avatar: Frontiers of Pandora Gets a brief overview of the gameplay

Marvel Snap, the upcoming free collectible card game set in the Marvel universe, will be officially released on mobile devices and PCs on October 18, 2022. heroes and villains, as well as a shorter average match time compared to other games of this genre, so that players immediately immerse themselves in the action.

“Return to Monkey Island” is scheduled for September 19, also known as “Pirates Day”, and Disney and Marvel Games Showcase shared with fans a completely new look at the long-awaited game.

The first gameplay trailer for Aliens: Dark Descent has been released

Aliens: Dark Descent was officially announced at the Summer Game Fest Showcase 2022 and is a top-down team shooter in which a team of space paratroopers fights hordes of xenomorphs. The presentation of Disney and Marvel showed the first look at the gameplay and told a little more about how the game will go when it appears on PCs and consoles in 2023.