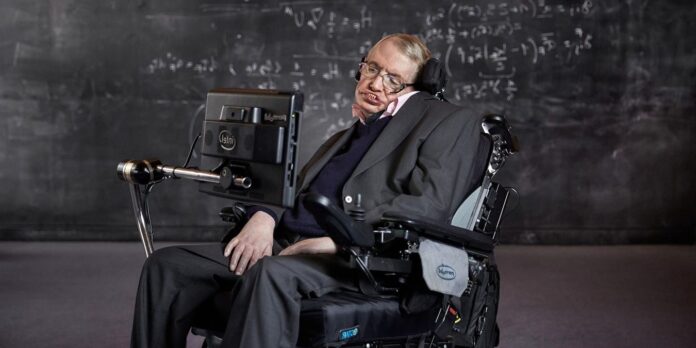 – Stephen William Hawking was born on January 8, 1942 in Oxford. His father, a biologist, had fled bombings in Germany with his mother and moved to London.

– In 1963, when Hawking was 21 years old, he was diagnosed with ALS and his doctors said he had two years of life left.

– In the late 1970s, the famous scientist, who started to lose speech due to ALS, suffered from pneumonia while visiting CERN in 1985. For this reason, it was necessary to make a hole in the trachea and he lost his voice completely.

– His book “From the Big Bang to the Black Holes” has entered the bestseller list, but it is unclear how many people have finished or can understand this book.

– Hawking, who participated in many television programs, also allowed his synthesized voice to be used in many recordings.

– He graduated from Oxford University with the first place and received his doctorate in cosmology (cosmology) from Cambridge University. In his youth, he was riding a horse and was interested in rowing. But when he was at Cambridge, he was diagnosed with motor neuron disease and almost completely lost his body’s function.

After a brief glimpse into the life of Stephen Hawking, let’s move on to all his discoveries, which were probably the most famous genius of modern times.

In some surveys, Stephen Hawking is missing or unlisted as one of the most important physicists of the 20th century or the best living physicists. Shouldn’t the most famous genius of modern times be included in these surveys?

The answer is of course yes. However, the world of physics has a wide field and many admirable names in this field. Hawking is just one of them.

Big Bang and Black Hole Theory
Isaac Newton’s view of gravity was that large objects penetrated into space by creating a magnetic field-like field. This area enabled a mass like Earth to apply power to another. In addition to these thoughts, Newton did not claim to know exactly what this power was.

According to Albert Einstein’s theory of relativity, gravity was not a space in space, it was what space had. One of Einstein’s claims was that an enormous object could collapse under its own gravity if it got out of control. This event was later called black hole.

These claims of both scientists were redefined in an article written in 1939 by American physicist Robert Oppenheimer and his student Hartland Snyder, who will develop the atomic bomb on the day. This idea could not be strengthened as this article was not supported by most physicists.

After graduating from physics, Stephen Hawking began his doctorate at Cambridge University under the supervision of cosmologist Denis Sciama. His main field of study was the theory of relativity and black holes.

Hawking began work on the Big Bang theory under the leadership of Sciama. This theory adopted the universe starting from a small center and then expanding. At this point, Hawking realized that the Big Bang was the opposite of the collapse of a black hole.

He developed his mind with Penrose. In 1970, the two together published an article describing the general relativity theory that the universe started as a singularity. As his illness progressed, he experienced a significant enlightenment while barely going to bed for a night in the late 1970s. In this enlightenment he realized that the size of a black hole can only grow.

When he announced that black holes could only grow in the late 1970s, physicist Jacop Bekenstein made a proposal to him. Bekenstein said the area of ​​the event horizon of a black hole may be a measure of the black hole’s entropy.

Hawking thought that this claim was not true until he started working to prove that it was false. As his work progressed, he realized that Bekenstein’s theory was fundamentally correct. To do this, he combined two areas of physics that no one could combine before; general relativity (relativity) and quantum theory.

Quantum Theory / Theory of everything
Quantum theory is a term used to describe small things that cannot be seen such as an atom or parts of an atom. The general relativity theory is used to describe things of a cosmic dimension, such as stars and galaxies.

From the outside, it seems impossible to put these two theorems together or interpret them.

According to quantum theory, the emptiness of space is null, because space cannot be straight and completely empty. Pairs of particles constantly emerge instantly, one forming the substance and the other forming the opposite substance. Since one has positive energy and the other has negative energy, a new energy cannot be created as a result. They cannot be detected because the two destroy each other very quickly. That is why they are called the resulting particles.

Hawking suggested that these pairs of particles can come true from what appears if they occur near a black hole.

As a result of this theory, Hawking, who previously suggested that black holes can only grow, proved to be wrong: Black holes actually mean it may shrink and gradually evaporate.

White Hot Theorem
Stephen Hawking introduced a new radical view of black holes in 1971. During the Bing Bang, he suggested that some pieces might have been broken into miniature black holes.

The area of ​​the event horizon of a black hole is getting smaller and smaller, its temperature rises, the black hole may be very small but its temperature may be high. This causes the mass to emit Hawking radiation until it eventually disappears. Here is a new one of his discoveries that made Hawking famous, the white hot theorem.

Stephen Hawking, in his article published in Nature magazine in 1974, also explained his theories about Hawking radiation and mini black holes that he has revealed so far.

The theory that knowledge disappears
In 1982, Hawking made another finding regarding the disappearing black holes. In his new claim, he explained that black holes destroyed information.

Rays of rays never return to the rest of the universe as they pass through the event horizon of a black hole. He thought this structure had some information. When Hawking delivered a speech in San Francisco in 1981 about the paradox of the disappearance of knowledge in black hole physics, American physicist Leonard Susskind objected to this idea.

In 1997, Hawking made a claim to the encyclopedia that information was lost in the black hole with John Preskill of the California Institute of Technology. At a conference in Dublin in 2004, Stephen Hawking announced that Susskind was right and that Preskill had won the encyclopedia.

Space and time separation
The interconnected interpretation of the theory of relativity, quantum theory, thermodynamics and knowledge theories in Hawking’s black hole studies is one of the most important discoveries he made and added to science.

In the 1980s, he tried to describe the Big Bang with quantum physics. Working with James Hartle, he developed a quantum equation where he explained the formation stages of the entire universe. The only thing these equations have revealed is that it is unwarranted to ask questions about the origin of the universe or to develop a theory.

Quantum physics suggests that it was very small in the early stages of the universe, where almost one nonetometer (0.0000000000000000000001 meters) was one billionth, so the difference between space and time is very blurry. This means that there are no significant boundaries between time and space in the universe.

Last words
Stephen Hawking, of course, is the scientist who modernly adds the most value and variable to the world of science, although he cannot live most of his life under normal human conditions. However, the fact that he remains in mind as Hawking, who is more popular in his culture than his Hawking profile, is another factor that needs to be questioned.

In the field of popular culture, he was portrayed with the character of Homer in The Simpson cartoon, starring in the BBC comedy series Red Dwarf, starring in the movie Star Trek: New Generation.

The Pink Floyd band also used Hawking’s mechanical voice in the Keep Talking song on their album, The Division Bell, which they released in 1994.

In 2007, he became the first paralyzed person to experience the environment without gravity in a specially developed aircraft.

Finally, in a program he participated on the Discovery Channel, he warned that it was logical to think that there was a life elsewhere, and that aliens could invade the earth and capture resources and then leave.