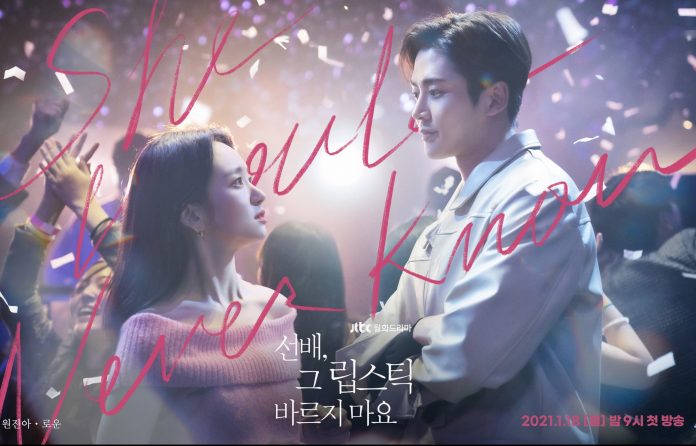 With a release date of January 16, 2021, She Would Never Know (Sunbae, Don’t Put On That Lipstick), featuring SF9’s Won Ji Ah and Ro Woon, is based on a popular 2017 web novel of the same name. tells a sweet love story between a lovely Sunbae and a sassy Hoobae who has it all.

In a recent interview, her director Lee Dong Yoon shared her first impressions of the K-drama history and the work of the cast that stars in it, and why she has been so impressed by Ro Woon’s performance.

At just 24 years old, Kim Seok Woo better known as Ro Woon from the K-Pop group SF9, has an interesting acting career in which he has shown his talent as in his last job in the K-Drama Extraordinary You where he gave life to the protagonist Ha Roo.

This year, Ro Woon returns to the screens to show her performance as the lead in She Would Never Know (Sunbae, Don’t Put on That Lipstick), scheduled to premiere on January 18.

As for Ro Woon, Lee Dong Yoon said, “It seems like Rowoon just came off the script. Everything is the same, from his impressive height and broad shoulders to his bright eyes and smile. When I met him in person, I was even more shocked than He assumed a very serious attitude towards the production. I was impressed by the way he immersed himself in the role even at his young age. Apart from his looks, I think there is no better actor to play Chae Hyun Seung, who grows when he looks enlightened by love. ”

In She Would Never Know (Sunbae, Don’t Put On That Lipstick), Won Jin Ah plays Yoon Song Ah, a young Sunbae who works as a salesperson for a cosmetics brand. She enjoys her job and her dream is to start her own cosmetics brand.

Meanwhile Ro Woon plays Chae Hyun Seung, a young Hoobae who works with Yoon Song Ah as a salesman as well. He is attracted to her and tries to woo her without success.