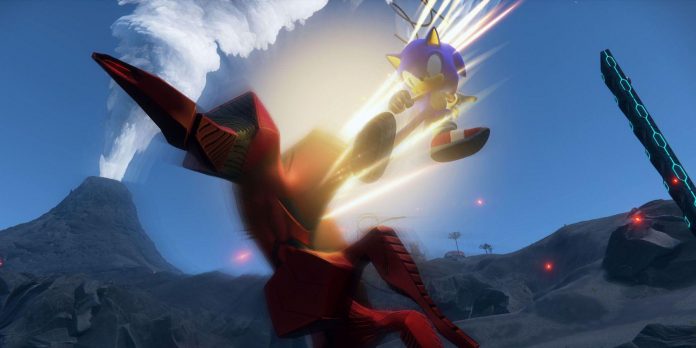 The creator of the Super Smash Bros. and Kirby series Masahiro Sakurai praised the upcoming Sonic Frontiers at the Tokyo Game Show. With the return of the Tokyo Game Show to a full-time event, fans could try out demo versions of some future games from many major publishers and companies. There were also many live broadcasts of upcoming games at the event, and Sega unveiled a new Sonic Frontiers trailer that focused on Sonic’s ability to become Super Sonic and fight titans roaming the world.

This event also allowed fans to try out a free demo of Sonic Frontiers gameplay, as well as demonstrations at Summer Games Fest and Gamescom. Impressions from the demonstration at Gamescom, and then at TGS, were incredibly positive: many gamers praised the new Sonic Frontiers gameplay with open zones, as well as smooth combat. This praise was also given by the respected creator and director of the Super Smash Bros. series. Masahiro Sakurai, who attended the event.

The official Sega of Japan Twitter account took a picture of the game’s creator playing the game and informed fans that Masahiro Sakurai actually stopped by the Sonic Frontiers booth to try out the game. According to a rough translation, Sakurai said he was thinking about buying the game because of how differently Sonic plays the game. The tweet then notes that Sakurai said he would “definitely” buy the game.

Both the Japanese Twitter account and the English account thanked Sakurai for the praise, which would most likely be a huge honor to hear from such a legendary creator like him. Fans were very happy to hear Sakurai’s praise for the gameplay, and many noted that Sonic Frontiers could really become one of the best games in the franchise if a designer like him approves it. Others joked that Sonic might finally have a new set of moves in the next iteration of Super Smash Bros., that he doesn’t just rely on rotation as he can now be based on Frontiers and his combat system.

Sakurai himself tweeted that he was glad to attend the Tokyo Game Show for the first time in a long time, noting that it had been a long time since he found himself in a long queue. Some of his photos show the stands he wanted to try, including the aforementioned Sonic Frontiers, as well as a remake of Crisis Core and a display for Street Fighter 6 with a statue of Chun-Li.