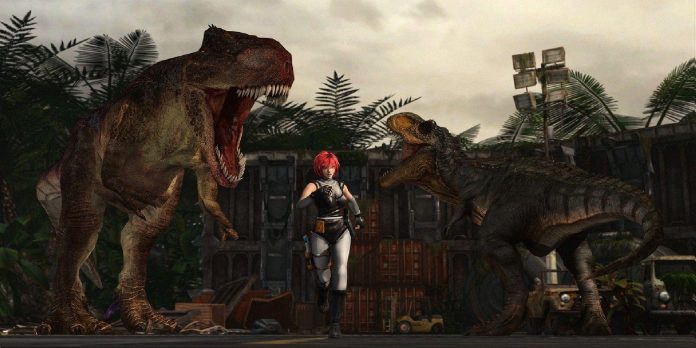 Jurassic Park was one of the first films in which dinosaurs looked really intimidating. Following the same principle, the Capcom Dino Crisis game also created a terrifying atmosphere using prehistoric beasts. Players take on the role of Regina, a special operations agent tasked with uncovering the secrets of a research center on an island overrun by dinosaurs. Proving its popularity among players, the original Dino Crisis saw two sequels after its release in 1999.
Unfortunately, there have been no new installments in the Dino Crisis franchise since these sequels were launched, and it seems Capcom is quite happy that the series has frozen. There were some rumors about the return of Dino Crisis when Capcom introduced Exoprimal, a game that also features dinosaurs, but the publisher has since confirmed that Exoprimal is in no way related to Dino Crisis, disappointing fans of the classic PS1 game. However, one fan wasn’t happy with letting the franchise rest as they created a remake of Dino Crisis on Unreal Engine 5.
RELATED: It Looks Like PS1 Classic Dino Crisis May Be Coming to PS4 and PS5
The remake of Dino Crisis, shown on YouTube by TeaserPlay, begins with a Tyrannosaurus Rex approaching Regina. Already with the sun’s rays reflecting from Regina’s point of view and the character models used, fans of Dino Crisis can easily see the graphical update that Unreal Engine 5 provides. Then a short trailer shows what looks like a research center where Regina confronts a predator. The darkness shown in the newly generated environment looks like a perfect horror setting, bringing Dino Crisis back to its scary roots.
As with other Unreal Engine 5 remake trailers, there’s plenty of footage here showing off an impressive graphical environment before some new dinosaur models are shown again. The T-Rex and raptor models have priority in this Dino Crisis fan trailer, as they are presented in any environment, from jungles to more temperate forests. This isn’t the first time fans have demonstrated how some of the Dino Crisis might look in Unreal Engine 5. Earlier, one player demonstrated a new Regina model that would fit into a remake of the classic game.
Other classic games have also been remade on Unreal Engine 5, such as the stunning Fallout: New Vegas version and the re-creation of Grand Theft Auto 3. While most of these fan creations will likely never be fully available to play, for Dino Crisis players, it is perhaps more likely that the fan experience of the following will become available generations, not an official new entry in the franchise, given Capcom’s attitude to this.

Epic Games Will Add Support For Achievements Next Week; How They...