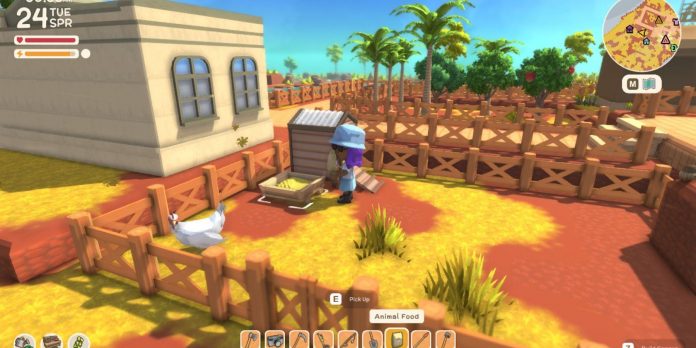 The animal world in Dinkum gives players fun and exciting gaming opportunities. There are several types of animals in the game, from predators to more harmless species.

Players can breed farm animals, hunt wild animals, or tame and catch animals, depending on the species. However, before doing any of this, players must learn how to create and apply for licenses. It is also necessary that Irwin, a local animal trainer, open a permanent store. The process will take time and effort, but soon enough players will become professionals in handling Dinkum animals.

One of the first things players will realize is that some animals will ignore them, while others will attack them as soon as they see them. There are several aggressive species on the island. Players should beware of these animals:

Crocos, crocodiles on the island, hang out in almost all the rivers in the area. They hunt many non-aggressive animals on the island and attack players as soon as they see them. They move quickly in the water, but give chase if they are spotted on land. Cautious mu are large creatures similar to emus. They have a protruding horn on top of their head, so they lower their head and rush at the players, hoping to hit them. They come from the tropics, so players can avoid them on many islands. Sharks, fortunately, pose a threat only in the ocean. Although they sometimes spawn near shrubs, they can usually be found in the Southern Oceans. They are incredibly fast in the water, so it is recommended to keep a reasonable distance when communicating with them. Bush devils are large predators that can shoot out of their mouths and try to bite when players get too close. Bush devils are mostly nocturnal, but they wake up and attack if they are approached while sleeping. Bush devils live in pine forests. Jellyfish, like sharks, are found only in reservoirs. They are not limited to oceans and can be found in most rivers. They move slowly, but they will poison the players if they get too close. Bats can only be found in mines, and they will also attack as soon as they see. However, they are fragile and can usually be knocked out quickly.

The island is also home to several non-aggressive species. They don’t attack at sight; however, some have offensive movements. Here are some of the friendliest animals:

Jackaroos are very similar to kangaroos, but with the qualities of a deer. They are available in almost all regions. They are timid, but when attacked, they prop themselves up with their tail and kick the attacker. Diggo are the dogs of the island, which are also found in most regions. Despite the fact that they are predators, they do not show much interest in the players. However, in case of an attack, they will defend themselves by biting. They can be tamed with the help of animal collars located in the mines. Mus – gentle relatives of Wary Mus. They are slow and docile, which makes them an easy target for predators on the island. Players can tell the difference between species by their color. The Mus is light grayish-brown, and the brutal versions are dark gray, almost black. The kidneys are very similar to hedgehogs. They will ignore the players when approaching, but if they are attacked, they will curl up into a ball and attack them.

Players can hunt the island’s wild animals using homemade weapons or tools purchased from the store. To get weapon recipes, players will need to apply for a hunting license in the Base Tent. Fletch is responsible for all licenses and issues them to players in exchange for Permit Points. Permission points are earned for completing milestones and can be earned daily, so you have ample opportunities to collect them. Players must also obtain a mining and logging license to unlock John’s axe and pickaxe.

To hunt, choose a tool or weapon and approach any kind of wild animals. Be ready for a fight and move fast so as not to take too much damage. Players will lose consciousness if the heart rate meter runs out and a new day begins.

How to use traps

Players will need to set traps after they are created. Then, to trap animals, players can chase passive species or lure more aggressive ones for a chase.

How to get farm animals

Players can also raise farm animals and handle them. There are three types of farm animals:

Chooks: These are chickens that will lay eggs that players can sell or cook and eat. Wombats: Act like cows in a Dinkum and start giving milk when they are old enough. Pleeps is a combination of a sheep and a platypus, and players can get wool from them.

All this can be purchased from Irwin. Irwin regularly visits the island and sells animals, feed and feeders.

Chronicles of 2 Heroes: Save Feudal Japan In The New 16-Bit...

273 accidents over the past year show the limits of Tesla’s...