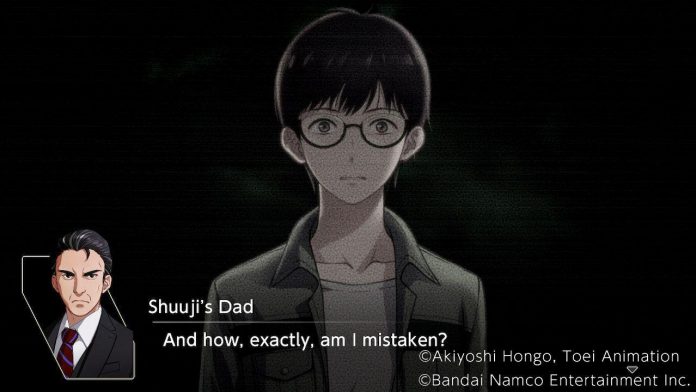 The fifth part of Digimon Survive explores the prehistory of Shuja, and also explores the underground waterway connecting the two islands.

Digimon Survive, Part 5, begins with a flashback/nightmare episode in which Shuji interacts with his father. He seems to have quite serious confidence issues, which are probably reinforced by his father’s neglect and rejection of him.

After Shuji wakes up, the game, as usual, proceeds to a group meeting in the cafeteria to discuss their plans. Minoru thinks the best course of action is to pursue the kidnappers to question them about the boundary between the worlds and the Caretaker, but for obvious reasons opinions differ when it comes to something so risky.

Think a little more… Moral + 1 Look for another way. Harmony +1 Enter the enemy base. Angry +1

Shuji seems to be going a little crazy, which is disturbingly familiar.

The game now moves to a free action segment for the chapter, which gives players 9 moves to interact with others and explore the School areas and Forests.

Here you can find Miu and Shakomon, where a conversation with Miu will give you the opportunity to increase Takuma’s closeness to her by playing along with her game.

Do it Syakomon! No effect. Yeah, we’ll throw it away! Miu Proximity up! Take Kaito’s side. No effect.

Players can talk to Miu a second time to find out that she has lost something and is looking for it. It’s worth the action, but it doesn’t pay off until the end of this Free Action, where it will enhance her intimacy.

Minoru can be found in the hallway with Falcomon, where he reflects on the legends of the Kemonogami. Takuma will wonder what people are doing with the disappearance of the group in their world.

A second conversation with Minoru will be worth another action and will show that his socks are gone. As in the case of the Miu above, this will pay off later by increasing proximity at the end of the free action.

Shuji and Lopmon are in the classroom. If a player comes to class first without hearing from anyone about the missing items, Shuji will worry about what to do and try to come up with a plan.

Let me help you too. Shuji’s proximity is up! It doesn’t suit you. No effect. You’re doing your best. No effect.

If Takuma has already heard about the missing items, Lopmon will let it slip that Shuji’s wallet is also missing. This causes increased intimacy with Shuji at the end of the free action.

Both conversations with Shuji were worth the action.

Haru and Miyuki, as usual, can be found in the Music Room, where a conversation with Miyuki will make Haru mention that he saw the girls changing clothes, and Takuma has the opportunity to comment on this to get a karma indicator.

Haru also gives Takuma three party kits with ribs that can be used to restore SP to multiple targets in a small area during combat. Talking to Haru again won’t be worth the action and will cause him to point at the monster in the hallway, even though it doesn’t actually trigger the event.

Kaito and Drakmon are together in the faculty room, where Takuma gets a chance to mention what he thinks of Kaito.

Are you used to fighting? No effect. Practical, actually. No effect. Great as a brother. Kaito Proximity up!

Talk to Kaito a second time to find out that a jar of food is missing. He is a little upset because it was Miu’s favorite game, and this conversation will bring Kaito closer at the end of “Free Action”.

Aoi is in the cafeteria with Labramon. Talking to her will make her comment on the ring she carries with her because it looks cute and lifts her spirits.

Cute… Aoi Affinity Up! Unexpected! No effect. Refreshing. No effect.

Saki and Floramon can be found at the gym, where Saki admits that he is struggling to maintain his mood. Saki asks what will happen if they become victims in this world.

I don’t know. No effect. We can go home. Saki Proximity up! We’re going to die, aren’t we? No effect.

After hearing about the missing items from someone else, returning to the gym after talking to Saki will be worth the action and trigger an event in which a mysterious person scares Saki. This will pay off at the end of the free action by increasing Saki’s proximity to Takuma.