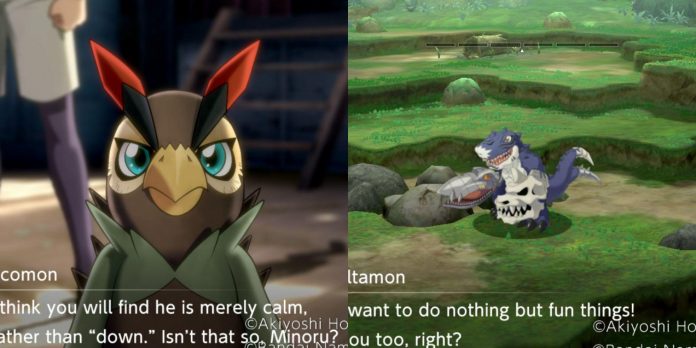 Digimon Survive has just been released recently, and fans everywhere are enjoying a brand-new Digimon adventure. The visual novel, tactical role-playing style is a unique approach for a Digimon game, and the story is quite compelling, with genuine stakes.

However, Digimon Survive isn’t perfect. It has a lot of problems that get in the way of enjoying the game. While the game isn’t terribly buggy, there are a few aspects to it that certainly could have been improved to make the gameplay experience better. Here are some fixes that would make the game that much better to play, and a more satisfying experience for fans.

Aesthetics are very important for a game’s presentation; the Persona series has proven that it can be a powerful selling point. Digimon Survive has some pretty interesting character designs, which include the many Digimon that the player meets throughout the game’s run.

However, Digimon Survive lacks a lot of overall flair in its general design and UI. Bland fonts, as well as very basic effects and transitions, make many moments in the game feel underwhelming, such as when a battle begins. A more stylized approach to aesthetic would make the game stand out a little more, and make it that much more interesting to go through. While the game doesn’t look ugly, it’s certainly possible to make the game look much better than it currently does.

Many Japanese games feature English voice acting as an option for those who would prefer it. This is especially true of more modern games that are set to release internationally. Digimon Survive doesn’t have this option, and while it doesn’t detract from gameplay for most players, this can make it hard for people who have reading difficulties such as dyslexia, or are visually impaired.

In addition, there are many parts in the game that aren’t voiced at all, which feels a little insufficient for a visual-novel styled game. Since the majority of the game is spent in dialogue scenes, not having a number of scenes be voiced, even if they are optional, makes it feel a little lacking. While voice acting isn’t essential for a good game, it can be a sign that the developers and publishers put care into it, and can be helpful for those who are visually impaired.

Digimon Survive is not only a story-based visual novel experience; it also features a tactical battle system similar to Final Fantasy Tactics. While some battles are encountered during the story, there are Free Battles that players can undertake in order to level up, recruit Digimon, or obtain items. These free battles are available often, and don’t take up too much time.

While the battle system is fairly comprehensive, battles in this game aren’t all that difficult. This is especially apparent with Free Battles, which usually only feature a few low-leveled enemies that are taken out pretty quickly even without having to grind for levels. Since battles don’t happen too much in the story, Free Battles are the best way to engage with the combat system, so having better battles to fight would showcase the combat system’s qualities more vividly.

Digimon Survive has taken a lot of influence from other popular franchises, and Shin Megami Tensei is certainly one of them. In Free Battles, the player can have their Digimon talk to an enemy Digimon and try to convince them to join. They are given a number of questions, and if the Digimon’s mood is good, they can join the party.

While the recruitment system is tried and true, it does need a few tune-ups. One major issue is that even if the player successfully establishes a good relationship with the Digimon, the Digimon can still refuse to join. In addition, they’ll disappear from the battle, meaning that players may need to start a new battle just to try recruiting again. This can be bothersome, especially if the player doesn’t want to play through Free Battles repeatedly. While recruiting Digimon isn’t necessary, players who have a favorite Digimon in mind will certainly want to get them on their team, and making it hard on them won’t help matters.

2 A Better Camera In Battles

Like many tactical RPGs, Digimon Survive features battlefields with 3D environments. The areas occasionally feature elevated ground that Digimon must jump up to get to or walk around, and it can be used to gain an advantage on a Digimon that is standing lower.

Sometimes, these elevated parts can block part of the field, making it hard to gauge the exact distance between Digimon. The player can adjust the camera, but it’s fairly limited, and the angle of the camera does not change. Having freer control of the camera would make it a lot easier to analyze the field, especially during boss battles where spacing is key. It may not seem like a big deal, but it is definitely bothersome when playing, and even casual players will quickly notice the issue.

Digimon Survive is a visual novel, and as a result, it is a largely text-based game. There is a lot of text to go through, especially when the optional and incidental dialogue is included. Expect to do a lot of reading when playing this game.

Jungkook Will Have A Beautiful Theme Park To Celebrate His Birthday