Home Entertainment Digimon Survive: How to make friends with Paramon 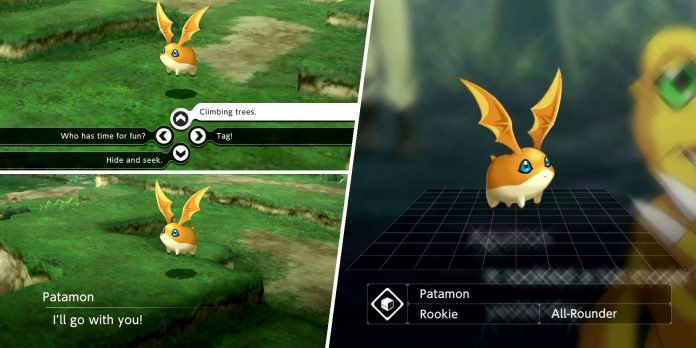 Although the number of digimons available to players is somewhat limited in the early stages of Digimon Survive, things change quite quickly, and by the time players reach Part 4, a wide range of powerful monsters will appear on the scene. Make friends with powerful digimons like Berdramon and Meramon, but these are far from the only good options when it comes to building a well-balanced team.

Patamon may not be the strongest digimon in Digimon Survive, nor does he offer much in terms of attack range or movement speed. However, his solid stats across the board make him a pretty decent all-rounder and a worthy addition to any team if players get the chance to hire him. However, in order to successfully make friends with Patamon, they first need to answer a few of his questions and statements, gaining three or more points in the process.

How to make friends with Patamon in Digimon Survive

To make friends with Patamon, players first need to meet him in a free battle, and then strike up a conversation with him by selecting the “Talk” option. Just like when making friends with other digimons in Digimon Survive, players will need to answer three questions or statements, and the best possible answers will bring two points apiece. If the players have three or more points by the end of the conversation, they will have the opportunity to ask Patamon to make friends with the probability of success determined by the player’s karma.

Despite the same questions and statements as Billaumont, Patamon’s best answers could not be more different than that of a little pink bird. Instead of valuing honesty above all else, Patamon values himself above others, although he is still loyal to his friends when necessary. Simplicity also works much better when answering Patamon’s questions and statements, as evidenced by Patamon’s best answers in the table below.

Question/Statement Is the best Answer Whenever I meet a scary monster, I just start apologizing. Weird, right? You don’t want to fight. Someday I’ll run this place! Let me work for you! What is the most important thing for you? Self. Why are the leaves green? I can’t really say. What do you do for fun? Climbing trees. I don’t care how cool you are, I won’t lose! I won’t lose! Have you ever lied? Once for a friend.

Where to find Patamon in Digimon Survive

Patamon will start appearing starting from Part 4, and players will be able to find a cute little flying mammal in free battle zones both at school and in the forest. This is not particularly common in either, but should manifest itself in a sufficient number of consecutive battles. To speed up the process, players can simply talk to other digimons they encounter and ask for items that should also bring them a decent supply of bandages and even some experience.

Bethesda: “The Elder Scrolls Online Can Only Get Better With Spanish...

Game of Thrones: The actor in the series who really hates...