Home Entertainment Digimon Survive: How to make friends with Dokugumon 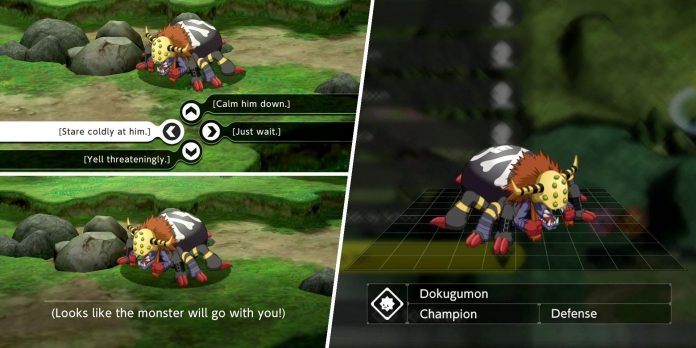 With its tarantula-like design, Dokugumon is one of the most intimidating creatures in Digimon Survivors. Perhaps for this reason, he was chosen as the first real boss of the main story of the game, when players fight a giant spider at the end of the first part. the opportunity to make friends with Digimon and add him to your team.

Unfortunately, making friends with Dokugumon is a bit more difficult than with some other “monas” in Digimon Survive, both because of the way he communicates and because of the low chances that he will agree to become friends. However, it is worth persevering, since Dokugumon is an excellent option for the early stages of the game and is able to transform into more powerful forms as the main plot develops.

How to make friends with Dokugumon in Digimon Survive

Befriending a Dokugumon is a bit like befriending a Numemon, as players usually react to a giant spider with actions rather than words. However, there are one or two cases where Dokugumon uses basic speech, at which point the players have to respond in kind. As with other digimons, players will need to end the conversation with at least three points if they have a chance to make friends with Dokugumon.

When it comes to the best Dokugumon answers, players should keep in mind that this is a Digimon that respects bravery and does not like those who back down. Thus, standing your ground is usually the best course of action, although there may be cases where players are forced to act in order to keep the digimons’ attention. For those who still have problems with friendship with Dokugumon, the best answers to his actions and statements can be found in the table below.

Action/utterance is the best answer (The monster has taken a threatening pose.) [Look at him] I… will eat you… ok? Try it if you dare. (The monster turns away as if bored.) [Throw something.[The monster seems puzzled by the sight of the man.] (The monster rushes in place.) [Looks at him coldly.[The monster seems to be begging greedily.] [Give him a candy.] Man… it won’t do! Sorry to bother you.

Where to find Dokugumon in Digimon Survive

Although players will encounter Dokugumon for the first time in Part 1 as part of the main story, the first chance to make friends with him will appear at the beginning of Part 3, when players enter the “Free Action” section. From now on, it will start appearing in “Free Bat”. districts, including the school district. If players want to get their hands on Dokugumon a little earlier, they can always Digitize Gotsumon, although considering how rare Mature Enlightenment Plates are in the early stages of the game, this would probably be a waste of time.