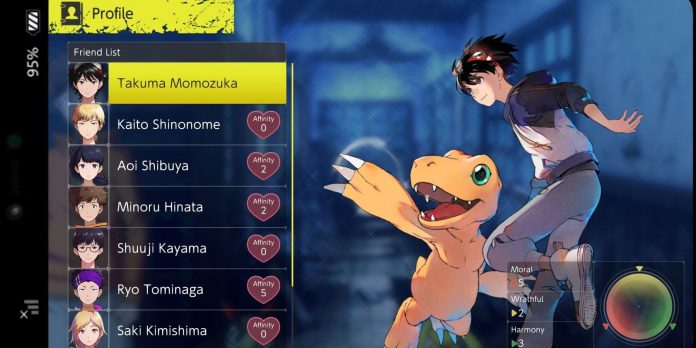 After years of delays and a change of development team, Digimon Survive will finally be released this week, to the delight of fans of the digital monster franchise. Ahead of its release, PlayStation and Bandai Namco have published a new blog post detailing what to expect from the Digimon Survive Karma system and how it will affect the player’s story experience.

Digimon Survive is the latest game to present a different take on the legendary franchise. Digimon Survive is a visual novel with elements of tactical battles, telling about several teenagers who went camping and found themselves in the digital world. It is designed to give Digimon a much darker shade with an emphasis on the player’s choice. The new karma system will complement this feeling by rewarding the player’s choices as they progress through the game.

In a blog post, assistant manager John Liao details how the karma system will change the players’ experience. In Digimon Survive, there will be a karma indicator that is directly affected by the player’s choice, for example, what the player decides to do in the morning or decides to fight or run. Karma is divided into three different categories that affect the growth of the digimons of the protagonist Takuma, Agumons or other types of digimons to which the player has access.

The three categories of Karma are called Moral, Harmonious and Angry. Each of them is indicated by a color, and, as the name implies, their descriptions are quite straightforward. Morality focuses on justice, is marked in yellow and allows access to a Digimon-type vaccine. Harmony focuses on collaboration, is indicated in green and is compatible with the Digimon data type. Wrathful focuses on achieving the goal, no matter what, is indicated in red and attracts a Virus-type Digimon. Depending on which path the player is gravitating towards, this will be directly related to the recruitment of certain digimons and the path of Digital Evolution to which they have access.

Liao ends by noting that there is no right and wrong answer, which is usually the case in games of this kind, as they seek to reward players for experimenting. However, it is important to note that the game uses the “rock-paper-scissors” combat system, in which some digimons have an advantage over others. Liao explains it this way: “Vaccine > Virus > Data > Vaccine.”

It looks like Digimon Survive will be a real shift in the franchise, which was once considered a rival to Pokemon. In light of the fact that Pokemon has changed significantly over the years, we hope this is what Digimon needs to breathe new life into the franchise.

Digimon Survive is scheduled to be released on July 29 for PC, PS4, Switch, Xbox One and Xbox Series X/S.