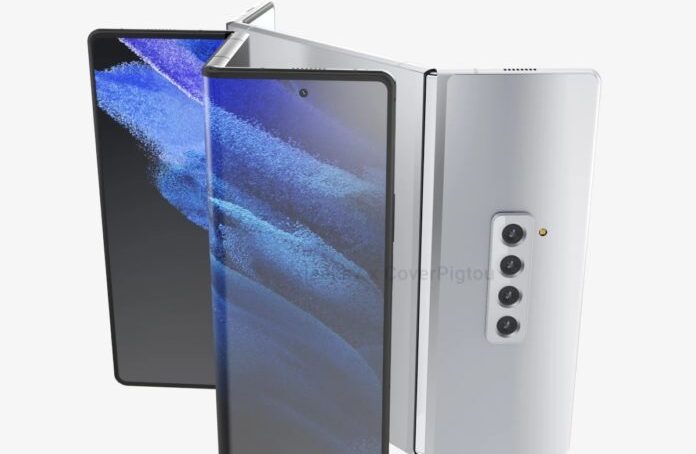 Last October, some draft photos claimed to belong to the Samsung Galaxy Z Fold 3 were seen. Thanks to the use of a double hinge design, a screen could be divided into three different screen parts. Also included in this sketch was a sliding QWERTY keyboard. Progress is acceptable for both elements compared to Samsung Galaxy Fold and Galaxy Z Fold 2 models. Now, some new Galaxy Z Fold 3 photos have emerged shared by Pigtou and xleaks.

The dual foldable structure of the Samsung Galaxy Z Fold 3 looks similar to that of the Galaxy Z Fold 2 in a way. There is a large screen in the middle and smaller screen parts on the left and right. The screen on the right is double sided. The biggest difference is that it folds from both sides instead of being folded in half. Instead of having a single hinge in the middle, this device has hinges on both sides. In this way, the device can remain in tablet mode even when folded. A smaller screen and four camera lenses can be used facing you. When you fully open the hinges, you get a larger screen, equivalent to that of a tablet.

There are hinges on both sides of the triple folding system of the Samsung Galaxy Z Fold 3. However, these fold in opposite directions. Thanks to the design, you not only get a larger screen when the device is in use, but also a larger external screen. Samsung was criticized for using a 4.6-inch screen in the first Fold model. In the model that followed, there was a 6.2-inch cover screen. In Galaxy Z Fold 3, it is stated that the outer screen will become larger. However, the presence of a slide keyboard is also mentioned. Thus, users will be able to use the foldable phone as a laptop if they wish. It should be noted that Pigtou made some changes to the images in Samsung’s patents by adding a perforated selfie camera to the front cover of the dual-deck model, and also added speakers under the two foldable screens on this model. Obviously, it makes sense for Samsung to add these to the real device.

It is said that Samsung will try to bring foldable phones to more users next year with more affordable versions of their foldable phones. The problem here stems from finding a balance point. Making a foldable phone cheaper will require Samsung to eliminate some of the features and components that made such a device possible in the first place. However, this should be done in a way that does not make the experience cheap or make the phone more susceptible to damage.

Exynos being pushed back? Here is Samsung’s new strategy