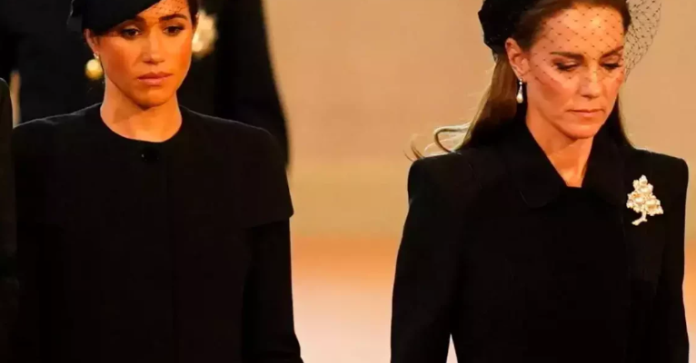 Both Kate Middleton and Meghan Markle are royal daughters—in-law married to the children of King Charles III. However, there is a big difference between them. Undoubtedly, Middleton occupies a higher position in the family, since she is the future Queen Consort, and her husband, Prince William, will become the next king of the United Kingdom. Prince Harry and Meghan Markle, on the other hand, have only the titles of Duke and Duchess of Sussex.

Meanwhile, the royal family has also shown inconsistency when it comes to the distribution of family heirlooms. Kate Middleton has access to the royal vault for all the royal jewels and gems. However, this cannot be said about Meghan Markle, who was not awarded any significant royal jewelry.

Royal expert Daniela Elser believes that during her recent speech at the annual Memorial Day service at the Cenotaph, Kate Middleton sent a painful message to her daughter-in-law from California. The Princess of Wales was seen wearing pearl and diamond earrings given to her by the late monarch.

It is noteworthy that Meghan Markle also received as a gift a pair of earrings from Queen Elizabeth, which she wore to the funeral of the latter. However, there is a huge difference in the value of the two ornaments, because apparently size matters, as well as history and meaning.

“Kate’s couple is signaling great things that on someone else you would assume are plastic fakes, they’re so big. Megan’s pair, although elegant and a very thoughtful gift from the late ninety—year-old, is comparatively small,” Elser said, as mentioned by Marca.

In addition, Daniela Elser claimed that the Duchess of Sussex does not own any of the royal relics. The only significant piece of jewelry she ever wore was during her royal wedding, when she borrowed Queen Mary’s bandeau tiara from the monarch. However, Meghan Markle inherited some jewelry that belonged to Princess Diana.

What do you think about Daniela Elser’s statements? Share it in the comments.

Kpop MV Producers Reveal Why They Use the Same Locations to...