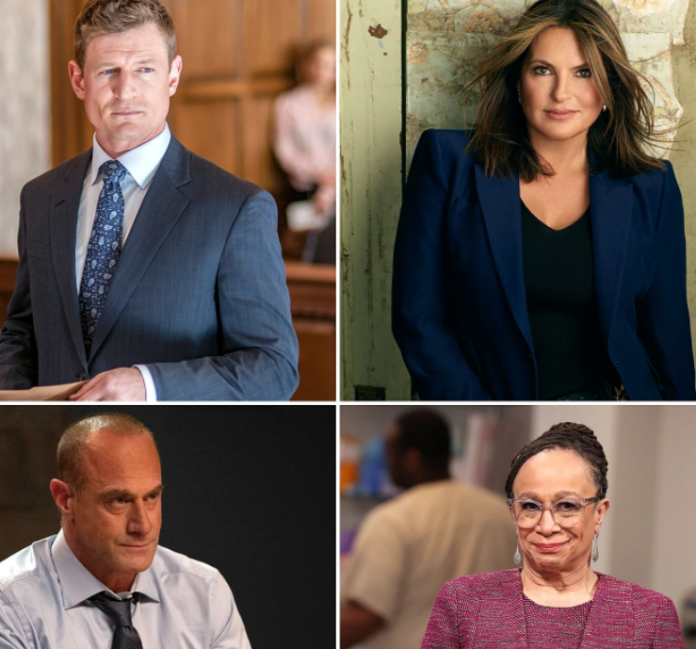 In the Dick Wolf universe, everything is fair! Having started as a screenwriter in “Hill Street Blues” in the 1980s, the producer became a superstar when he created “Law and Order” in 1990.

Since then, the TV giant has directed several Law and Order spin-offs, including the long-running series Law and Order: Special Victims, which premiered in 1999, and Law and Order: Criminal Intent. Wolf then moved viewers from New York to Chicago, creating Chicago Fire and its subsidiaries in 2012: Chicago PD, Chicago Med and Chicago Justice.

Just when fans thought that Wolf could no longer have ideas for a procedural drama up his sleeve, he created the FBI universe, which consists of the FBI, FBI: Most Wanted and FBI: International.

Over the years, keen-eyed fans may have noticed that Wolf has several favorite actors who have appeared in his series over and over again, including Christopher Meloni. (This is not counting the full-fledged crossovers he makes in the One Chicago universe and in the FBI sphere.)

The Washington, D.C. native was an OG member in the cast of Law & Order: SVU, but left in 2011. In an unexpected turn of events, Meloni got his own TV series “Law and Order: Organized Crime” in 2021, in which he plays his role. The same SVU character, Detective Elliot Stabler.

“These two shows exist in the same universe, a fictional, very mundane universe. And we never forget that these other characters and these other stories exist,” Wolf told The Wrap in April 2021 after fans saw Meloni reunite with Mariska Hargitey, who plays Detective Olivia Benson in SVU. “And when we tell a story about a Stabler in Benson’s world, or Benson in Stabler’s world, and things happen that affect their characters, we don’t just forget about it.”

The executive producer continued: “Therefore, from the point of view of writing a story, it is both difficult and painful to make sure that these things remain alive, as long as the shows have their own personality, each of them.”

Meloni, for his part, told Entertainment Weekly in March 2021 that Wolf had made him an offer he couldn’t refuse, which led to him playing the role of detective again and periodically appearing alongside Hargitey in both shows.

“I was pleasantly surprised that everything turned out as well as it turned out. Because, you know, life doesn’t shake out like that, right?” he told the publication. “You can have all the dreams you want, all the preconceived ideas about how it will be. But I have to say that the past decade has been everything I could have hoped for.”

Meloni is not the first actor to play the same role in several of Wolf’s shows. Philip Winchester, for example, first appeared in the Chicago police. in the role of Peter Stone, before heading to “Law and Order: IED” in 2018.

Actors such as Jeremy Sisto and Alana De La Garza made an impression on the TV series “Law and Order” in the early 2000s, and more than a decade later joined the FBI. However, the two stars play completely different characters in crime series, and they are not alone in this category.

Will students have the right to benefit from meal vouchers?