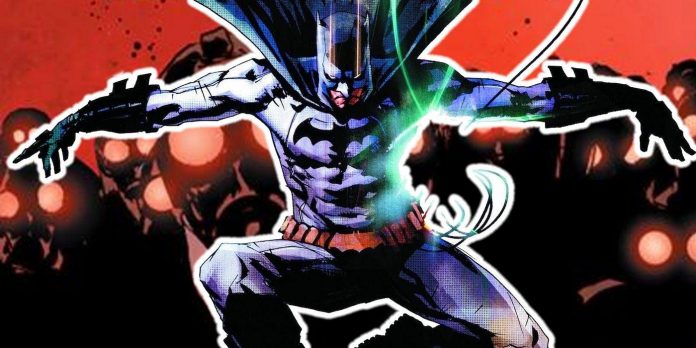 In DC comics, Batman is known for having a unique gallery of terrifying crooks, and this fact extends to the iteration of the Dick Grayson character. Since fear is one of the main elements of Bruce Wayne’s Batman image, it is quite natural for many of his villains to have qualities rooted in horror. With characters such as Clay Face, Scarecrow, Court of Owls, Two-Face, Mad Hatter and Joker, Batman’s publication history is marked by several forays into the horror genre. And while Bruce Wayne’s Batman has had his share of terrifying moments, Dick Grayson’s Batman has faced scarier threats for one simple reason.

Dick Grayson was Batman’s first Robin, who later assumed the identity of Nightwing and eventually, after the event of Final Crisis, became Batman. Born into the family of a circus performer, Dick lived a loving and stable youth until his parents were shot by mafia boss Tony Zucco. No matter how tragic this event was, it never led him to the same deep isolation as Bruce Wayne, which was evident during his time at the Young Titans. Thus, Dick’s easygoing nature and frivolity earned him a reputation as a more balanced version of his mentor.

It’s for this reason that Dick Grayson’s Batman villains are far more disturbing than Bruce Wayne’s villains will ever be. Approaching villains as a reflection of the characteristics of the hero, Dick Grayson’s qualities require that villains be his complete opposite. The appeal and popularity of Nightwing remains one of the most indisputable multiverse constants in the DC universe. That is, in almost every existing version of the DC universe, Dick remains the central figure of kindness and teamwork, no matter how strange the circumstances. Because of this, it’s easy for fans to take Dick’s good nature for granted: it’s almost unthinkable to imagine him being evil. And yet, as shown in Detective Comics # 871-881 by Scott Snyder, Jock and Francesco Francavilla, the dark opposite of Dick Grayson’s Batman is absolutely terrifying.

The arc of Snyder, Jock and Frankavilla in the detective comic, also known as “Black Mirror”, introduced the villain, James Gordon Jr., the son of Commissioner Gordon, who is everything Dick Grayson is not. James Jr. is a psychopath who has enjoyed torturing animals and other people since childhood. And although psychopathy as a condition cannot and should not be attributed to environmental factors, the loving home that the Gordons provided him makes this trait even more shocking. With James Gordon Jr. as Dick Grayson’s dark opposite, “Black Mirror” questions everything about Dick’s character, in which fans have found solace and security, pointing out how strange it is that someone with such a troubled past miraculously exists as the pinnacle of goodness in the DC universe. Instead of trying to assimilate Dick into the existing form of Bruce Wayne’s Batman stories, “Black Mirror” is the Dark Knight’s most frightening story precisely because it distorts fans’ long—standing relationship with Dick Grayson.

Readers rarely expect a sense of security from Bruce Wayne’s Batman stories, and that’s one reason why his horror research works so well. But with Dick Grayson’s Batman, this idea takes on a more terrifying effect, as fans have become accustomed to viewing Dick’s character as a safer and less isolated version of Bruce Wayne. Bruce’s demons have always been obvious to readers, but Dick’s deft management has made it easy for fans to forget the real darkness that exists in his personal history. Similarly, since James Jr. existed in comics for so long before “Black Mirror,” fans don’t expect the boy seen in “Batman: Year One” by Frank Miller and David Mazzucelli to grow up and become a serial killer. So when Dick’s Batman encounters the true, stomach-churning chaos of James Jr.’s violence, he crosses the line of expectation, which heightens the sense of horror in the story.

This makes James Jr.’s resemblance to Dick even more spectacular in the role of the Batman villain. Continuing the idea of the villain as an individual reflection of the heroes, James Jr.’s characterization emphasizes Dick’s impeccable character compared to his mentor. Fans have never had to look closely to find Bruce Wayne’s flaws, but for Dick, whose ability to calm people down and get out of life-threatening situations with a smile on his face made him so popular, this paradigm is being distorted into much darker territory. Dick inspires other characters in the DC universe, as well as comic book readers, to be better versions of themselves, and when James Jr. embarks on a plan to turn other people in Gotham City into psychopaths like him by drugging them, it reverses the joyful, inspiring influence that Dick Grayson had to the world.