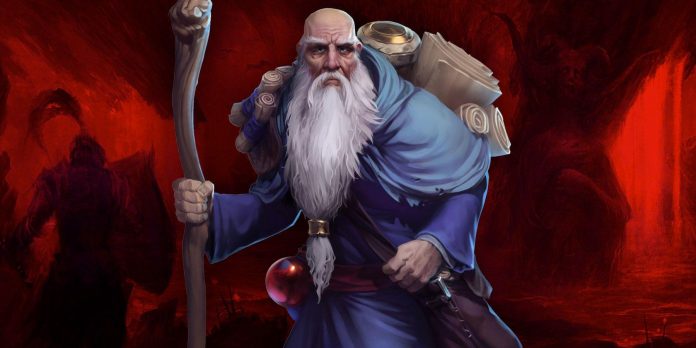 With the release of Diablo 4 approaching in 2023, Blizzard is slowly but surely revealing the contents of the upcoming addition to its favorite franchise. The gaming giant confirmed that the events of Diablo 4 will continue the story of Diablo 3. Although the main villain of the game was also confirmed to be the Daughter of Hate, Lilith, there was quite a lot of information about the game’s laura that has yet to be revealed. One such question concerns the return of certain characters who have appeared throughout the series, such as the ever-helpful scientist Deckard Cain.

Fans of the Diablo series know Cain as “Elder Tristram”, the main character of the first Diablo game, and since then he has appeared in every game in one way or another. In the original Diablo, Cain was an NPC who stood in the middle of the village and helped the heroes on their journey. Unfortunately, he died at the beginning of Diablo 3, so it’s unlikely to see the old scientist in the upcoming gameplay of Diablo 4, but it would be worth going through his story on the eve of the release.

The Growing Up of Deckard Cain

Deckard Cain is a horadric scientist well versed in the mysterious knowledge of Sanctuary and its secret history. He is also considered the last of the Horadrim, an ancient brotherhood of magicians and wizards created by the archangel Tyrael to confront three primordial evils — the Lord of Destruction Baal, the Lord of Hatred Mephisto and the titled Diablo, the Lord of Terror. In 1202, Deckard was born and raised in the village of Tristram Sanctuary in the family of a tanner, his father and his mother, Aderes Cain, who insisted that Deckard inherit her family’s legacy and take the name Cain, not his father’s name. As a child, he and the other children of Tristram gathered around Aderes when she told stories about the great deeds of the Horadrim from whom she was descended.

As a child, Deckard was proud of his Horadrim heritage and often boasted that he was “the last of the Horadrim.” He dreamed of fulfilling his legacy of Horadrim, defeating evil and protecting all people from Kaldey to Khanduras in the name of justice. But when Deckard lost his father to illness, things began to take a turn for the worse, and his faith in his mother began to wane.

He was always the scholarly type, and whenever he wasn’t playing fetch or stealing eggs, he liked to collect history books. Driven by madness, Aderes decided to burn all these books, as she believes that the only “correct reading” were the texts written by Deckard’s ancestor, Jered Cain. As a result, he lost interest in his mother’s stories, considering them nothing more than fables, especially the story about the existence of angels and demons — a belief that is not outdated in Diablo. Deckard left home, and his mother declared him “lost.”

Cain is a Scientist

In his youth, Cain lived most of his life in pursuit of knowledge, from studying the “archaic teachings” of Kejistan, the city that returned to Diablo 4, to the city behind the Order of Zakarum. This continued almost to the point of obsession, leading to tension between him, his friends and family as he completely shut them down in pursuit of knowledge, including his wife Amelia and son Jered, named after Deckard’s ancestor. During his studies, he missed important moments in his son’s life, and he was not hurt when Jared caught a fever that almost took his life. Disappointed, Amelia took Jared and left Tristram, but their van was attacked by bandits, which led to their death. Their deaths will haunt Deckard for the rest of his life.

In 1258, Leoric came to the land of Khanduras and on behalf of Zakarum declared himself king of the land, and Tristram its capital. Remaining in Tristram, the scientist served as a mentor to Prince Aidan, who would become one of the most powerful Diablo characters during the events of the game. But as time went on, King Leoric became more and more tyrannical, imprisoning and executing anyone who asked him questions, and Cain began to write down his thoughts in a diary, which made him think about the stories that his now deceased mother told.

During the Eclipse of Tristram, Deckard Cain studied the books stored in the library of Tristram Cathedral, in particular, old choradric texts. There were exactly the stories that his mother had told him, and he couldn’t help but notice that in these texts angels and demons were treated not as a myth, but as real players in the history of Sanctuary. He also discovered that it was Jered Cain, his ancestor, who personally led a group of Horadrim who pursued and captured Diablo. Thanks to the descriptions given by the choradric texts, Cain was convinced that King Leoric was somehow possessed by the demon Diablo, but never acted according to this knowledge.

Doyoung shows his vulnerable side with cover of Falling