Home Entertainment Diablo Immortal: Tips that every beginner should know 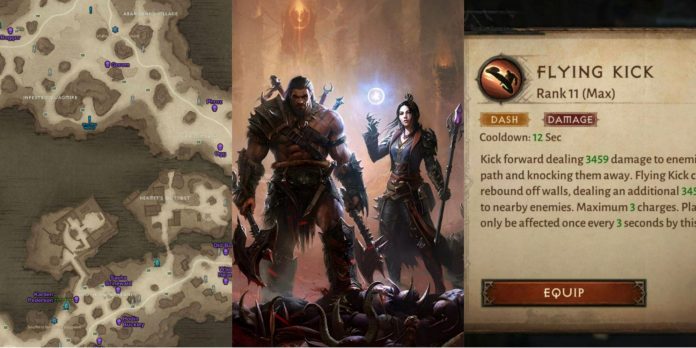 The Diablo series has held high positions on the throne of role-playing fighters for decades, looking down on all rivals who could challenge it, and the launch of Diablo Immortal only helped to strengthen its royal position. The desire to please PC and mobile players at the same time is a difficult task, but if any game is suitable for this task, then it may be this one.

RELATED TO: Diablo Immortal Multiplayer Game: how to play with friends

Regardless of whether the player is new to Diablo Immortal or the franchise in general, there are some things they should know when they first meet, as this free hack-and-slasher is full of depth. Whether it’s understanding classes, surviving in the depths of a dungeon, or pumping equipment to keep it suitable for PvP, there’s always a lot to learn. Here are some tips on Diablo Immortal that will help beginners gain an advantage in a difficult moment.

At the beginning of the game, the player must choose one of six classes: barbarian, Crusader, Demon hunter, monk, necromancer and wizard. Some, such as the Barbarian, specialize in rough hand-to-hand attacks, while others, such as the Wizard, prefer ranged battles using elemental magic. All six classes are viable, although some are a bit simpler than others.

A necromancer, for example, is a very flexible caster capable of becoming a skeleton-oriented pet class, a defensive monster building walls of bones, or an AoE chain reaction nightmare using a Corpse Explosion. Some classes may be better than others if you use min-max for PvP or PvE, but they all have considerable depth and variety. The best starting choice is what the player finds most interesting.

Skills and builds are flexible

Although Diablo Immortal does not have extensive skill trees, it still boasts a significant variety of unlockable abilities. As the character level increases, new skills will become available, and the old ones will become stronger. In addition, powerful equipment will further improve skills, either enhancing existing effects, or completely replacing them.

RELATED TO: Diablo Immortal: Light all 9 lamps at the same time Solving the puzzle (Lost Runes)

It’s natural to find your favorite skills and develop strategies around them in the first hours of the game, but it’s useful to play with new skills and create combinations. Even if the player does not think that this skill will suit his taste and style of play, it is worth a try, since trying out new skills can reveal unexpected combinations of strength, allowing the player to better mobs and bosses who might otherwise have cornered them.

Health needs to be managed carefully

The player has three health potions, which are replenished according to the recovery time. There is also a short recovery period between the use of health potions, so the player must be tactful when choosing the right moment to use them in battle. Killing enemies and dealing significant damage to bosses also causes red health spheres to drop, and collecting them will restore health just as if a health potion was used.

Collecting health spheres has no recovery time, so the player can grab them even if he has recently drunk another sphere or a health potion. How difficult it is to manage health depends both on the style of play and on how much the class is inclined to play on the front line. Whether you take blow after blow as a barbarian or retreat and avoid harm as a wizard, knowing when to drink a potion, when to grab a health sphere, and when to retreat at all is a vital skill for survival in some difficult battles.

Unnecessary equipment can be disposed of

Like other dungeon scanners, Diablo Immortal showers players with loot. Killing demons, opening chests and completing quests lead to the loss of gold, gems, weapons and armor, and soon after completing the training, the player will find that his inventory is overflowing with equipment. In other games, the presence of identical swords, shields that differ by only one or two points in one characteristic, and dozens of ordinary armor can cause concern.

RELATED: The Best Characters to Appear in Diablo 4

Diablo Immortal has an elegant solution for extra gear. Any equipment that the player does not need can be broken at the blacksmith in the safe zone of the center. This rewards the player with a crowbar used to upgrade equipment. Upgrading requires a significant amount of materials, so the player must take every item he can and drag it back to the city to break it.