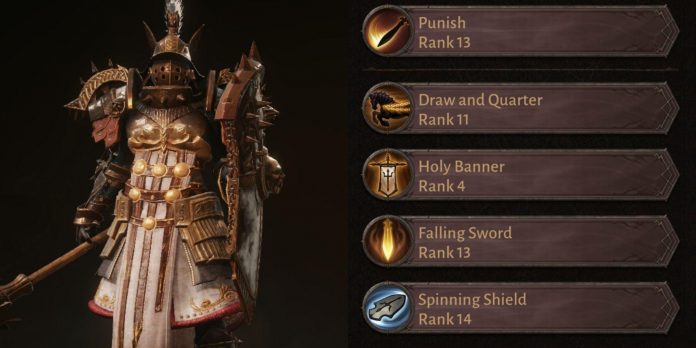 The Crusader class in Diablo Immortal, when it chooses to focus on something, it goes all in. It can fill its entire taskbar with mobility, tanking, single-target damage, or group-damage skills. In higher Challenge Rifts, players need a little bit of everything to come out on top.

The best Crusaders in Diablo Immortal have some difficult decisions to make as a result. Which skills do they take and which ones must get left behind? Analyzing the top Crusaders on the leaderboards from each server, there does seem to be a build that is most successful.

Slot Skill Description Primary Skill Punish Strike an enemy for X to X damage and gain Hardened Senses, increasing your Block Chance by X% for X seconds. Skill Draw and Quarter Mount a celestial war horse for X seconds, dispelling all movement impairing effects, increasing your movement speed by X%, and replacing your Primary Attack. Holy chains will bind up to X nearby monsters, dragging them as you ride and repeatedly dealing X damage. Skill Holy Banner Plant a holy banner that inspires nearby allies for X seconds, increasing Critical Hit Chance by X%, but decreasing Critical Hit Damage to X% instead of double. Critical Hit Chance over X% will grant up to X%. Skill Falling Sword Impale your holy sword at a location where it deals X damage over X seconds to all nearby enemies. Activate again to launch yourself into the heavens and come crashing down at the sword’s location, dealing X damage to all nearby enemies and retrieving the sword. Skill Spinning Shield Hurl a spinning shield, inflicting X damage to all enemies in its path. The shield will return, pulling enemies in its path to you and dealing an additional X damage. Maximum X charges. Players can only be affected by Spinning Shield once every X seconds.

This is not a purely Spinning Shield build, but that skill will be handling the group damage. Draw and Quarter does the work on the mobility side of things while Punish will be responsible for both single target damage and blocking/defense.

Slot Piece Legendary Effect Head Arrowkeeper The inspiration from Holy Banner now moves with you. Chest Besieger Draw and Quarter periodically calls down a Bombardment for X damage to nearby enemies. Shoulders Sivket’s Advantage Draw and Quarter duration increased by X%. Legs Bladed Jambeau Draw and Quarter’s mount becomes a fiery steed that Burns the ground and enemies, but no longer drags enemies. Main Hand Tumult Falling Sword now summons a storm of blades around it, continually damaging all nearby enemies, but can no longer be activated again for movement. Off Hand Sinkhole Cross Spinning Shield hovers at a location, damaging enemies and reducing their movement speed.

If this gear looks like a cross between a Spinning Shield and a Bombardment build, it is. With most of the Challenge Rift requiring the Crusader to take out mobs, group damage is going to be a massive priority.

There is a clear shift from Untouchable Mountebank to Vithu’s Urges as players increase the difficulty of the Challenge Rift. The second effect, specifically, is important when it comes to taking down the final boss. When the build is executed correctly, this will be the toughest challenge of the entire rift.

Family Family Attribute Jolt You have a X% chance when attacked to immobilize your attacker.

The Barrier family also gets some love, so those who get two families will want one of each on all six pieces. Both have attributes that occur after being attacked that will immobilize enemies and shield the PvE Crusader from further attacks.

The first two attributes are significantly helpful for Holy Banner and survivability. In the Barrier family, there are plenty of beneficial effects that deal damage to elites and give the Crusader more life.

Primary attacks will indeed be necessary after getting to the end of the Rift; the final boss won’t just stand around in a Spinning Shield. The defensive boosts from these can help the Crusader survive to see the end as well.

2-Star Gem Effect Battleguard Decreases all melee damage you take by X% from enemies within X yards. Fervent Fang Each time you deal damage to an enemy, that enemy now takes X% increased from your attacks, up to a maximum increase of X% at X stacks. Lightning Core Your Primary Attacks and movement slowly charge you up with electricity. When fully charged, your next Primary Attack will release chain lightning, dealing X% base damage +X to nearby enemies. Cannot occur more often than once every X seconds. Power and Command Power and Command alternate states every X seconds. Power increases your Primary Attack damage by X%. Command increases all other skill damage by X%. The Hunger Heal X% base damage +X Life each time you defeat an enemy. Cannot occur more often than once every X seconds. Cutthroat’s Grin Gain X% increase Critical Hit Chance when attacking from behind.

It’s important to note that more than a handful of players keep the Power and Command gem, even with 5-Star alternatives. If players master the timing, they can get a boost on all their regular attacks and skills.

1-Star Gem Effect Berserker’s Eye Increases all damage you deal by X%, but increases all damage you take by X%. Ca’arsen’s Invigoration Increases the speed of your Primary Attack by X%. Chained Death Increases damage done by your attacks by X% per target hit, up to a maximum of X% with X targets. Defiant Soul Each time you block an attack you deal X% base damage +X to all nearby enemies. Cannot occur more often than once every X seconds. Respite Stone Decreases all damage you take by X% for every X% your Life is below maximum, up to maximum damage decrease of X%. The Black Rose Each time you are attacked, you have a X% chance to summon vines that Immobilize the attacker for X seconds. Each enemy cannot be affected by this more than once every X seconds.

Berserker’s Eye is, incredibly, on many veteran builds, despite lacking the Resonance of other 5-Star and 2-Star gems. With Punish blocking hits from bosses, surrendering the defense is not as noticeable as the output gained.

Defensive gems are still present in the PvE build, so don’t ignore them entirely. Players use them when their Life, Armor, or Resistance is lacking. Gamers sure figure out if they need to replace an offensive gem with trial and error testing.