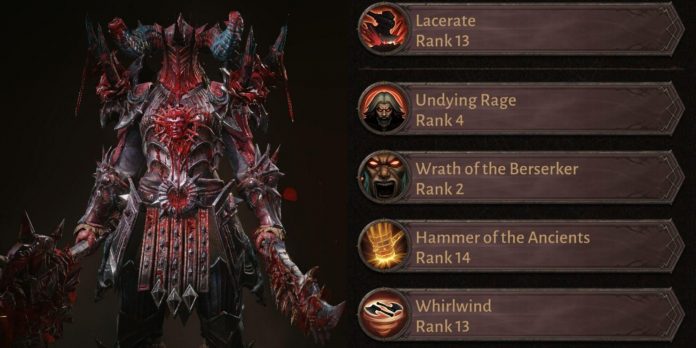 Barbarians have a plethora of weapons and options in Diablo Immortal. They can grab and throw enemies, chain them, slow them, or stun them. Alternatively, they can invest in their own movement, leaping and sprinting around the map like no other class can.

Given many great choices of skills in Diablo Immortal, it’s a tall order to find the very best skills. Hopping from server to server and seeing what the highest-rated Barbarians are doing in PvP, this guide details exactly what the best of the best use to top the charts.

Slot Skill Description Primary Skill Lacerate Launch a series of attacks that deal X to X damage with each hit. Every third hit heals you for X% of damage done. Skill Undying Rage Enter a rage for X seconds that prevents you from dying and causes all your attacks to heal you for X% of damage done. Skill Wrath of the Berserker Enter a berserker rage that increases your attack speed by X% and movement speed by X% for X seconds. Skill Hammer of the Ancients Call forth a massive hammer that smashes enemies in front of you for X damage and shakes the earth itself, dealing X additional damage over X seconds. Skill Whirlwind Become a whirlwind of steel, continually striking all nearby enemies for X damage while moving at X% reduced speed. Using Whirlwind slowly consumes its energy, which recovers while Whirlwind is not in use.

This build likely looks like a blend between the Frenzy build and Whirlwind build, which is not entirely inaccurate. The Barbarian has an opportunity to thrive against opponents when they group up or when they are caught alone, taking the best of each world allows them the freedom to be aggressive regardless of the situation.

Players are free to take the best statistical gear available in the legs slot. All other pieces are relevant to the build. Adding a stun effect to Hammer of the Ancients and a trap effect to Whirlwind further enhances the deadliness of the class in PvP.

Set Bonus 2/6 Effect 4/6 Effect 6/6 Effect Grace Of The Flagellant All continual damage, Channeled damage, and persistent ground damage increased by X%. Each time you damage an individual enemy X times, you will do X additional damage to that enemy. Each time you deal damage, you have a X% chance to unleash a lightning strike, dealing X damage to all nearby enemies and Stunning them for X seconds. Cannot occur more often than once every X seconds.

Grace Of The Flagellant has an obvious bonus to Whirlwind with the channeling boost. The next two effects also work with Whirlwind, but equally benefit the rest of the attacks against individual targets.

Family Family Attribute Wildfire You have a X% chance when you defeat an enemy to summon a fireball-spitting Hydra.

The family bonus for Wildfire has very little application, as it’s unlikely to ever occur in a PvP fight. However, the individual attribute bonuses within the family make this benefit way too tough to pass up on.

The most successful Barbarians in PvP have gone all-in on damage and left the crowd control to others. With this in mind, it’s best to take skills that enhance the Barbarian’s damage, embracing that role completely and letting teammates cover the other tasks.

The Barbarian, by virtue of being on the frontline, does not have the luxury of avoiding damage for an entire Battleground. The gems might seem a little too tanky, but between the 5-Star Resonance Bonus and the rest of the gems, there is plenty of offensive output here.

2-Star Gem Effect Battleguard Decreases all melee damage you take by X% from enemies within X yards. Fervent Fang Each time you deal damage to an enemy, that enemy now takes X% increased from your attacks, up to a maximum increase of X% at X stacks. Lightning Core Your Primary Attacks and movement slowly charge you up with electricity. When fully charged, your next Primary Attack will release chain lightning, dealing X% base damage +X to nearby enemies. Cannot occur more often than once every X seconds. Power And Command Power and Command alternate states every X seconds. Power increases your Primary Attack damage by X%. Command increases all other skill damage by X%. The Hunger Heal X% base damage +X Life each time you defeat an enemy. Cannot occur more often than once every X seconds Cutthroat’s Grin Gain X% increase Critical Hit Chance when attacking from behind.

Fervent Fang is occasionally selected over other 5-Star gems. That may sound stunning to believe, but the additional stacking damage truly does eliminate enemies much more quickly. Catch a team off-guard or with some allies and it’s lights out.

1-Star Gem Effect Chained Death Increases damage done by your attacks by X% per target hit, up to a maximum of X% with X targets. Everlasting Torment Your critical hits inflict agony, dealing X% Base damage +X every second for X seconds. Each enemy can only be affected by this once every X seconds. Berserker’s Eye Increases all damage you deal by X%, but increases all damage you take by X%. Respite Stone Decreases all damage you take by X% for every X% your Life is below maximum, up to maximum damage decrease of X%. The Black Rose Each time you are attacked, you have a X% chance to summon vines that Immobilize the attacker for X seconds. Each enemy cannot be affected by this more than once every X seconds. Trickshot Gem Your Channeled skills consume energy X% slower.

Both Berserker’s Eye and the Trickshot Gem make appearances among top-tier players, even some who have every 5-Star gem at their disposal. More Whirlwind time and additional damage (even if the tradeoff is taking more damage) swing skirmishes in the Barbarian’s favor.

Given the choice between tanking and damage, elect for extra damage every time, allowing the best defense to be a good offense. Some players have one or two tanking variety gems instead, but this should only be done on a case-by-case basis if survivability is proving to be an issue.