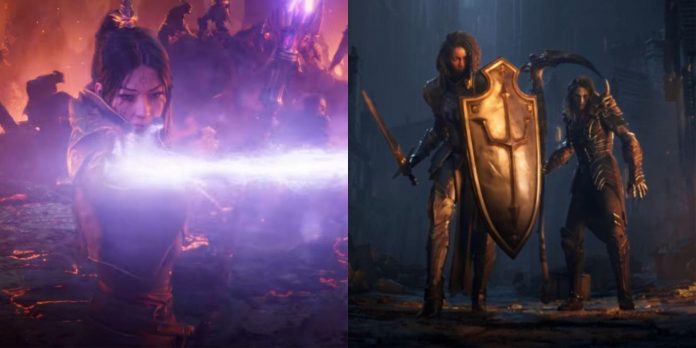 RELATED: Diablo Immortal Player Spent $100,000 on the Game and Now Can’t Get into Matches

Actually, yes. For players wealthy and lucky enough to get access to the best legendary gems, there are builds that can be immeasurably better than standard builds. Need proof? Check out the leaderboards for the Challenge Rifts and Battlegrounds in Diablo Immortal and find that these are destroying the charts.

This list is broken down into PvP and PvE sections. The order was compiled by averaging the ranking of each build across all servers and uses the builds of the top players.

Being constantly slowed and pulled is both annoying and fatal. By investing in a PvP Whirlwind build, the Barbarian becomes both a source of constant harassment and a bit of a tank. This leaves enemies with the choice to either fruitlessly target the Barbarian or deal with his constant slows and pulls while they attack the Barbarian’s teammates.

For builds that take over PvP opponents, they usually require a strong disable, otherwise the foes just retreat back to safety. The perfect PvP Necromancer build has a Golem that can jump constantly, closing the gap with enemies and stunning them. Toss in some Bone Armor and Wraith Form to make the class both tanky and mobile.

Catching even one enemy in a combination of Black Hole and Disintegrate is often a death sentence for the victim. When the Wizard catches an entire team, it can end Battlegrounds in record time. What makes this the greatest PvP Wizard build is not just that combo but the invisibility and movement granted by Teleport.

Though the best PvP build for the Crusader may be called the Spinning Shield build, teammates will appreciate the whole skillset. The Crusader has a solid mix of support skills, tanking, and group damage that will make allies happy to have one on the team. As with other strong PvP builds, enemy teams will have to scatter to avoid taking group damage.

Seven-Sided Strike is incredible against groups of foes and single targets alike, so it’s a natural fit for the best PvP Monk build. In addition to some important team buffs, the Monk can stun an entire enemy team if they group up, forcing them to scatter and lose the protection they would have had with their teammates.

The skillset for Demon Hunters in PvP and PvE is identical, but the best build for PvP Rain Of Vengeance characters is anything but a copy-paste of the PvE version.

With some extra mobility for the class and disables/slows against opponents, the Demon Hunter is currently topping the charts across most servers when it comes to the Battlegrounds leaderboards.

Dropping a comet on everyone’s heads is as powerful against mobs as it sounds. Build around the Meteor in PvE and the Wizard is likely the fastest class at clearing everything up to the boss in Challenge Rifts. Ice Armor and Arcane Wind can protect the Wizard and disable opponents so that the Wizard isn’t in danger for most of the fight.

No class gathers up groups of enemies and blasts them down like the Crusader. Other characters may have a nod to mobility, but the best PvE Draw And Quarter build is the ultimate of killing opponents while on the run. There’s a good buff from Holy Banner for the final boss as well. Toss in Falling Sword for even more mobility and this class can close the gap like no other.

The story of the Challenge Rifts at greater difficulties is a tired story for other classes. they can breeze down the entire instance but the final boss takes forever. With an ideal Frenzy build for the Barbarian, the final boss is actually the easiest part of the instance. Don’t worry, Whirlwind does plenty of damage to the mobs along the way.

One issue that prevents other classes from completing Challenge Rifts is that they take too much damage over the course of sustained combat.

The best PvE build for Necromancers has other units do the tanking instead, freeing up the Necromancer to focus on damage and avoiding major attacks.

It is possible to keep a nearly 100% uptime on Vengeance with a build that specializes in using it. That’s an incredible damage buff that will kill most opponents before they can get into melee range of the Demon Hunter. For bosses and elites with extra health, there is more than enough mobility here to kite and pepper down targets simultaneously.

Currently leading on all servers in Challenge Rifts, the Monk’s PvE Cyclone Strike build has a bit of everything. Invincibility, mobility, and, of course, massive group and single-target damage. Due to the nature of how the skills stack, it will take more than just a damage nerf to reduce the output of this build. The build renders monsters useless for large chunks of time.

How the Flash Superman crossover Can Still Happen (despite the Big...