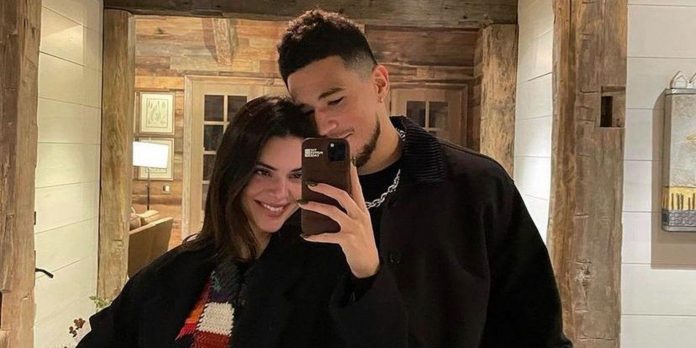 Devin Booker is not trying to lose Kardashian star Kendall Jenner again and is reportedly “focused” on making Kendall happy after their brief breakup. Kendall teased signs that she and Devin are back and better than ever after insiders confirmed their split late last month. The couple seemed to be doing well when they attended the wedding of Kourtney Kardashian and Travis Barker. But a few weeks after attending the ceremony in Italy, fans began to notice the tension in the relationship.

By the end of June, sources confirmed that Kendall and Devin had broken up after two years of relationship. But as soon as the reports surfaced, Kendall and Devin began to stir up rumors of a reconciliation. The couple were spotted in Malibu before a party in the Hamptons on July 4th weekend. Most recently, the Kardashian star Kendall posted photos of her and Devin’s outfits at the star wedding, which they attended last weekend. Kendall took care of cutting out Devin’s face in the photos. But it was obvious that the supermodel was making it clear that she had returned her man.

Now, a month after the announcement of their breakup, sources confirm their reconciliation. “Devin made a huge effort to fix the relationship with Kendall almost immediately after they broke up,” a source told HollywoodLife. Apparently, Kendall insisted on her own and wanted Devin to take their relationship seriously. “The threat of losing her was a huge wake—up call for Devin,” the insider explained. After Kendall’s return, NBA player Devin “focused on making her happy,” a source shared. and Devin is “back in the honeymoon stage” and can’t get enough of each other. Kendall’s family and friends are just as happy to see her back with Devin. “Everyone would like to see them get married,” the source said. .

It is reported that the Kar-Jenners are so supportive of Kendall and Devin’s relationship because of how much they love each other. Attending Courtney’s wedding gave the family time to get to know Devin and see how much of a “gentleman” he is, the source said. But they were disappointed when Kendall and Devin broke up a few weeks later. It is reported that Kendall wanted more from Devin than he was giving her at the time, and she ended it. But after the reconciliation, the Phoenix Suns player reportedly went “higher and further” for Kendall. He is said to be showing Kendall the love she deserves and has promised to want the same things from a relationship as she does, including marriage and starting a family. “He told her that he couldn’t imagine his life without her,” the source commented.

Judging by the teases Kendall has shared on social media and their recent paparazzi sightings, it becomes clear that Devin is here to stay. The NBA player has a promising sports career, and Kendall is at the peak of his career in the modeling world. The fame and success of the Kardashian star in the tequila industry only increases the potential of the powerful couple Kendall and Devin. Devin is the first significant fan Kendall takes seriously. It would be wise of Devin not to screw up and lose a good thing. I welcome possible wedding calls and news about children in their future.

Easter eggs “Cute liars” in “Original Sin” you will have to...