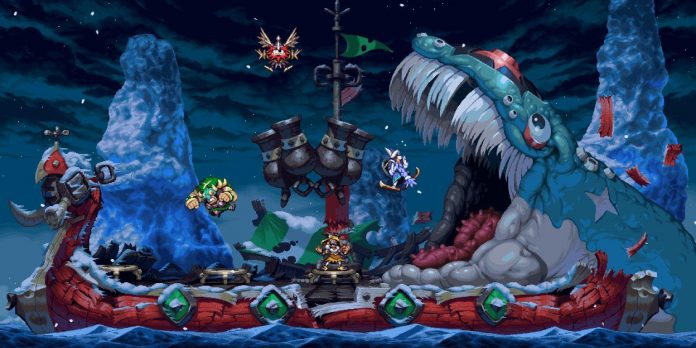 Gamescom 2022 will be held at the end of this month from August 24 to 28. As usual, gamers can expect quite a few new discoveries and other announcements to be made at Gamescom. But it looks like one of these discoveries has been made before. D-Pad Studio, the developer of the beloved indie game Owlboy, has finally lifted the veil on its long-awaited sequel, and it’s probably not what most fans expected. Rather, it’s a game with a silly premise expressed in its title: “Vikings on Trampolines.”

Among the many memorable indie games released over the past decade, Owlboy 2016 stands out for several reasons. The fact that it has been in development for nine years is certainly one of them, but since its launch, the game has received praise for its lush pixel graphics, memorable characters and story, as well as unique gameplay. One of the main features of the Owlboy gameplay is the ability to fly at will and without restrictions, which makes the movement mechanics one of the clearest in the latest 2D platformers.

This penchant for creating games around interesting movements has moved on to the next D-Pad project. As the name suggests, Vikings on Trampolines, a side-scrolling adventure game, will revolve around passing on a trampoline. This is absolutely necessary for the gameplay, as shown on the game’s Steam page with a GIF file showing how one of the main Viking heroes directly explodes when landing on non-bouncy ground.

Using these trampolines, players will be able to jump in several modes. In the story mode, they will go in search of saving the Viking king from the villain Baluni and his minions from balloons, and they will be able to go on an adventure alone or with friends in a local cooperative for 4 players. The Versus mode, similar to a party game, will also give them the opportunity to compete against each other at various stages, using their trampoline jumping skills and various items to see who will rule.

Combined with intuitive take-and-play controls and the high-quality pixel graphics that D-Pad is famous for, Vikings on Trampolines has the potential to become another strong player in the pantheon of indie platformers. As for when players will be able to try it out for themselves, it’s still unknown. The release window hasn’t been announced yet, but since D-Pad is showing off its new game at Gamescom, there’s a chance it could change in the near future.

Vikings on Trampolines is in development for PC and consoles.

EA and NFL have extended the license agreement for Madden

Outlander: First photo of Sam Heughan and Caitriona Balfe on the...