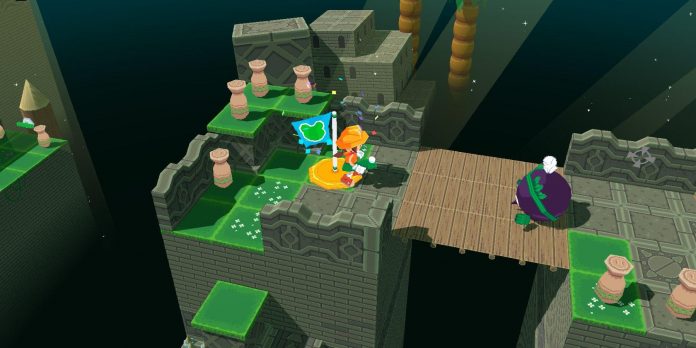 Few people are experts in any given field from the offset, and this is especially true in complicated endeavors such as game development. While AAA studios can hire hundreds of specialists to tackle different aspects of a game’s narrative, graphics, programming, and more, indie projects with small teams often require people to wear many hats. Raul Martinez Garrido applied a lot of lessons from earlier projects to his latest commercial venture, Frogun.

Also known by the online pseudonym molegato, based on a teenage email address mixing his love of moles and cats, Garrido ramped up to Frogun with a number of smaller titles. This is similar to plenty of developers like Dreamside Interactive founder Serge Korolev, who recently talked with Game Rant about his experiences prior to developing the survival-RPG Frozen Flame. Game Rant spoke to Garrido about his early game dev experience, and how that informed the way he thinks about projects today.

RELATED: Trek to Yomi Devs on the Benefits of Publisher Support for Indies

Garrido was born in Spain in 1989, and said “I’ve always loved to make things as much as just using them.” Some of his earliest creative projects included drawing comic books or “labyrinths” to explore with his action figures, and this quickly expanded to video games. His first experience came from 8-bit consoles, and he would come to love classics like Super Mario and Mega Man. However, the PlayStation was a truly formative console, as it dropped at a time when he was “still being a kid,” yet old enough to analyze what he was playing. Thanks to his “economically humble” upbringing, he was unable to afford a PS2, and as a result kept playing PS1 games for multiple generations as friends moved on to games like Jak and Daxter.

Video games made such an impact on Garrido that he said he’s fantasized about making them since he was a little kid, though it would be some time before he’d discover his “game making program” RPG Maker, serving as a “gateway into development proper.” Throughout his teenage years, Garrido tested out different engines while messing with one-stage fan projects, mods, and more ambitious titles that would inevitably never get finished. Then Spelunky creator Derek Yu released a Tumblr blog post titled “Finishing a Game” on September 17, 2010 that led Garrido to realize “I was doing a lot of things wrong.”

By 2013, Garrido began to release small, free games like Chainsaw Cat and Sword of Storms “mostly to prove to myself that I could actually FINISH a game,” according to the molegato website. While this format was fun, it was also limiting, and Garrido wanted to work on titles inspired by the roguelites, kart racers, platformers, and other genres that he loved. This led to larger endeavors like the twin-stick shooter/roguelike hybrid Demented Pixie and the Mario Kart/Crash Team Racing-inspired Supersonic Tank Cats.

“The two most important things in order to make a game (at least, for me) were knowing the route and goal from the start, and keeping up momentum toward it. No diversions on side projects, no new features that change the whole game design. Just a plan, and moving in a straight line toward completing it.”

Breaking Into Full-Time Development With Frogun

Demented Pixie and Supersonic Tank Cats cost $5 each on Steam, price tags coming so that Garrido could feel “validated” putting in the increased development time while working full-time to pay for bills accrued by living alone. “It’s a bit silly, because I do love making games and that should have been enough motivation as long as my day job kept me stable,” he said. “But it’s hard dealing with that feeling.”

Supersonic Tank Cats was announced on the molegato blog on January 9, 2017, and released via Steam Early Access that September. Garrido spent three years on the game, and walked away feeling “a bit burnt.” That led to the idea for a short platformer that could be developed in under a year based on an idea he’d created years prior. However, that has since grown into Frogun: the biggest project he’s ever made in terms of outreach, release platforms, length, polish, and features. Garrido said it quickly became hard to balance personal projects with his work as a freelance digital artist.

“So when it was clear that Frogun was growing, it was also clear that to give it as much love as it needed, I would need extra funds and work time.”

It helped that Frogun received positive attention from day one, standing out as an adventure-platformer coming-of-age story about Renata saving her archeologist parents from the Beelzebub ruins; inspired by fifth-generation console titles like Crash Bandicoot and Mega Man Legends. This led him to publisher Top Hat Studios, and then a Kickstarter campaign in June 2021 that raised almost 31,500 euro. Over a year later, Garrido has taken Frogun to events like Wholesome Direct 2022, and thanks to the support of Top Hat it’s available today for $15 on PC and all major consoles.

Frogun is also available at retailers in North America (with European and Asian launches to-come) through distributor Limited Run Games – which is also offering a Collector’s Edition with an artbook, soundtrack featuring the music of Adam Foley, and more. Garrido said he “never expected to be here” before starting on Frogun, and still gets nervous about meeting peoples’ expectations. However, he said when he collaborates with other creators, that fear goes away.

“It’s like a dream come true; all of these talented creators and super unique projects, and I’m along them. It’s really affirming.