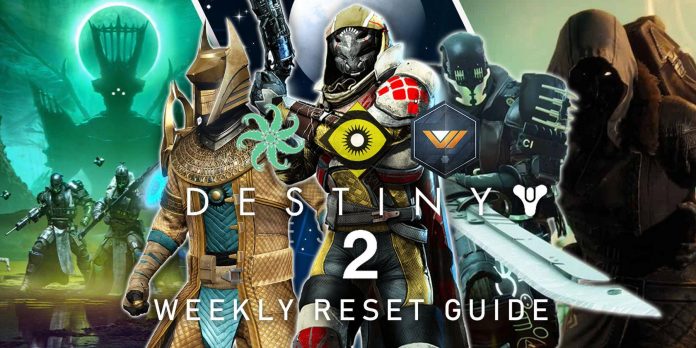 Updated July 5, 2022: As the Season of the Haunted slowly approaches its end, Destiny 2 fans have been eager for the weekly reset. So far, players have managed to resolve the hauntings of Crow, Zavala, and Caiatl, though the most recent Sever mission has hinted that dire things could be on the way. This week, players can finally discover where Calus and the Darkness if it isn’t the outright season finale event.

In addition to the latest Sever mission and other refreshed content, Grandmaster difficulty has finally returned to Nightfall Strikes. For those who may not know, Grandmaster serves as some of the most challenging PvE content within Destiny 2, while also serving as a great activity to farm great loot. For finishing all Grandmaster Nightfall strikes, players can even earn, or gild, the Conqueror title.

So with so much new stuff to look forward to, let’s get started on the Destiny 2 weekly reset details. For the complete look at all the new content available for the week of July 5 including, Nightfalls, Crucible modes, and challenges, here is everything players need to know.

All previous modifiers. Champions: Barrier and Unstoppable Hero Modifiers: Extra Shields The Closer: When targets are nearby, players have improved slide; after sliding, ranged weapon attacks deal increased damage for a short time.

Season of the Haunted Activities

Within Season 17, Bungie is giving players the chance to become the reaper in a new matchmade or public event activity on the Leviathan called Nightmare Containment. With the Leviathan corrupted, players will be summoning powerful and challenging Nightmares in an attempt to cleanse them in fire. Naturally, players will be rewarded with new weapons and gear for their trouble. This week, the rotation continues as players will be facing off against another rotating Tier 3 Nightmare boss.

In addition, players have a weekly mission called Sever to take part in to advance the seasonal storyline. In this mission, players will be navigating the Leviathan’s Underbelly to discover Calus’s ultimate goal, while also working to sever his control over the Nightmares and healing the trauma to characters like Caiatl, Zavala, and Crow.

Inside of Season 17, Bungie has moved older Raids and Dungeons to a weekly rotation to make them farmable with updated rewards.

The Wellspring and Throne World

The Wellspring continues to offer powerful rewards even during the new season. Each day, the Wellspring activity switches between Defend and Attack. Starting off on Reset Day, players can take part in the Defend version and earn Veritas Armor as well as the Tarnation legendary grenade launcher. Players will need to obtain three with Deepsight Resonance to unlock its frame for crafting.

In addition, the weekly reset has refreshed pinnacle drops, both from the Wellspring, Preservation, and the Vox Obscura replayable exotic mission.

Season of the Haunted Weekly Challenges

Season 17 is in full swing alongside new Weekly Challenges to complete. As players have found in season’s past, objective range from finishing seasonal story content, getting a certain number of kills, completing various activities and more. Rewards for these objectives include XP, Bright Dust, and on occasion, items or resources.

Play three matches to earn a Pinnacle drop in Crucible and Gambit.

Trove Guardian is located in Anchor of Light, while the wandering nightmare is Nightmare of Xortal, Sworn of Crota at Sorrow’s Harbor.

The Dreaming City is at a growing curse level this week, which means Petra Venj can be found in Divalian Mists and has The Oracle Engine mission for the next week. The Blind Well features Hive enemies and the plague, Cragur.

Finally, the Ascendant Challenge is Shattered Ruins from the Spine of Keres.

Xur, the exotic merchant of Destiny 2, arrives every weekend until reset, giving players a short window to check out what he has in stock. Here’s what the merchant had for the weekend of 7/1:

Make sure to check back every Friday for a comprehensive breakdown of all the new exotic gear and rolls that Xur brings to Destiny 2.

Trials of Osiris also rotates in on Friday, so check back on Friday for the updated list. As Bungie previously revealed, Trials of Osiris has undergone a makeover to not only make it more accessible, but to make it more rewarding as well. Gone are the win requirements tied to specific rewards as Saint-14 now has a reputation system that rewards players for ranking up through playing and completing bounties.

Explanation of the 1.4.2 update for Dying Light 2