Home Entertainment Destiny 2: The Vow of the Disciple God 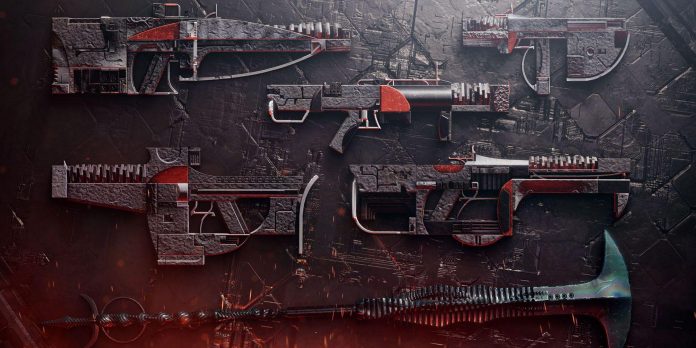 Destiny 2 isn’t necessarily a hard game. In fact, most content can be breezed through without much of a second thought. Strikes, Gambit, and Crucible are cakewalks with how strong guardians have gotten over recent expansions and subclass reworks. Some activities within Destiny 2 can really offer players a challenge, with dungeons and raids at the absolute forefront of difficulty.

Each time Destiny 2 has a major expansion, a new raid drops with all-new weapons and armor for players to grab. Often, these loot drops are higher quality than most world drops due to the difficulty of the activity. Vow of the Disciple is the most recent raid to be added into the game with The Witch Queen and has some fantastic weapons to offer.

RELATED: Destiny 2: Tips For The Vow of The Disciple Raid

The best version of a weapon is often referred to as a god roll by the Destiny 2 community. Here is every weapon, and every god roll that Vow of the Disciple can give.

What is the God Roll for Deliverance?

Deliverance is a 780 Charge Time Stasis Fusion Rifle. Fusion rifles aren’t an absolute necessity in Destiny 2 but are quite enjoyable nonetheless. They can see play in both PvP and PvE and be pretty strong when the roll is right.

Deliverance shapes up as one of the better fusion rifles. Being a stasis subtype allows for certain perks like Chill Clip, which has great utility in freezing targets that are directly hit with the top half of the mag.

What is the God Roll for Submission?

Submission is a 900 RPM Kinetic Submachine Gun. Submachine guns have been, and always will be, the kings of taking down low-tier enemies. They mow through low-level ADs like it’s nothing and therefore are always best when rolled with perks that let them do that.

Frenzy is just a fantastic perk all-around, giving everything the player wants for literally just playing the game. Damage, reload speed, and handling are all stats that are incredibly beneficial in whatever sort of content players find themselves in.

What is the God Roll for Lubrae’s Ruin?

Lubrae’s Ruin is a 55 RPM Solar Glaive. Lubrae’s Ruin is probably the weakest of weapons from the raid. Not only due to it being a Glaive, a weapon that struggles to find usage in both high and low-end content. It also pales in comparison perk-wise to the other potential powerhouses that can be dropped from this raid.

That being said, it is easily one of the coolest-looking weapons that can drop from this raid and looks like the weapon Rhulk uses throughout his fight.

Grave Robber + Swashbuckler/ Vorpal Weapon: Lubrae’s Ruin really doesn’t have anything unique. This roll is nice for damage, but apart from that, it does not do much else.

Swashbuckler doesn’t even apply to the Glaive melee damage, only the projectile, so it removes many decent damage options. Vorpal Weapon also helps for damage against bosses but once again doesn’t benefit the Glaive’s melee, which is arguably the most fun way to play with the weapon. Grave Robber just helps with reloading, which can often take a decent amount of time otherwise.

What is the God Roll for Forbearance?

Forbearance is a 72 RPM Arc Special Grenade Launcher. Forbearance has to be one of the best possible weapons to drop from this raid.

As a Waveframe grenade launcher, its projectiles fire a line of energy when it hits the ground. This makes it perfect for AD clear and comes with some great rolls that make Forbearance excel in this field.

Ambitious Assassin + Chain Reaction: This roll is almost mandatory for Forbearance. It is community-agreed by far the best combination of perks you can get on this weapon.

Ambitious Assassin allows the gun to be reloaded over its usual amount, limiting the need for reloading through fights. Chain Reaction makes every enemy killed with this gun explode into Arc damage. Forbearance becomes an absolute menace in low-level content, quickly demolishing large groups of ADs with a single shot.

What is the God Roll for Insidious?

Insidious is a 450 RPM Arc Pulse Rifle. Insidious is a pretty good Pulse Rifle; it’s definitely one of the better ones on offer. Generally speaking, Pulse rifles only find use in the higher end of content, with Grandmasters being a favorite. Rolls for Insidious are very much dependent on what the player is using it for.

Rapid Hit + Rampage: This is the standard workhorse roll for Insidious. Rapid Hit is great on Pulse Rifles as it stacks it rather quickly, giving the player a good amount of stability and reload speed. Rampage is excellent, as it gives stacking damage each time the weapon kills an enemy.

Stats for All + One for All: This is the roll for high-level content. Stats for All and One for All synergize incredibly well together as long as the player is hitting multiple targets. This is rather easy to pull off in high-end content as enemies have much higher health pools. This roll just gives Insidious an insane amount of bonus stats, making it worthwhile running.

What is the God Roll for Cataclysmic?

Cataclysmic is 533 RPM Solar Linear Fusion Rifle. Cataclysmic was previously the king of DPS before being overtaken by Stormchaser with the release of Season of the Haunted. That said, Cataclysmic still shapes up as one of the best weapons for boss DPS in the current meta.

This is fantastic for DPS phases that often have time limits, so reloading is a big no. Bait and Switch is the way to go in terms of damage; as long as the player has damaged the boss with their other weapons, it gives a great damage buff to the weapon.