Home Entertainment Description of the gameplay of the game Mario + Rabbids Sparks of... 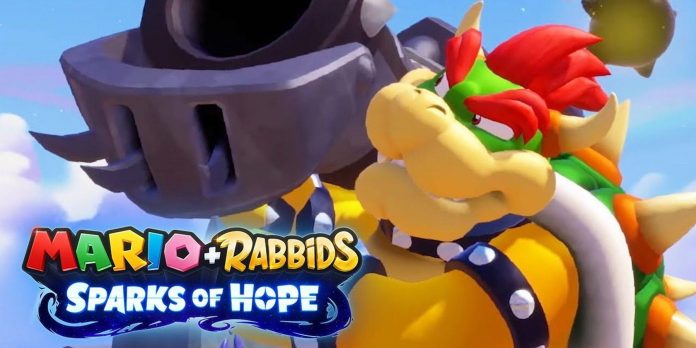 There were a lot of announcements made at Ubisoft’s press conference at E3 2017, and while most of them were pretty run-of-the-mill, one game stood out a lot. When Ubisoft’s Davide Soliani took the stage with Nintendo legend Shigeru Miyamoto, they announced Mario + Rabbids Kingdom Battle, a turn-based tactical game combining two franchises. Although the game was leaked some time ago, the way both publishers joined forces with the iconic image of Miyamoto wielding one of the game’s blasters quickly spread across the internet and the game attracted a lot of attention. Fast forward five years, and a sequel called Mario + Rabbids Sparks of Hope is heading to the Nintendo Switch.

Although it was announced a year ago at E3 2021, Mario + Rabbids Sparks of Hope has only had a few trailers released so far. The vast majority of the footage for the game was taken from the June release of Nintendo, where a cinematic trailer was shown, followed by a seven-minute detailed dive into the new mechanics of the game. One of the biggest discoveries of the cinematic trailer was that Bowser joined the game list this time, and now, thanks to a deeper immersion in the gameplay, fans have a better understanding of how he will play in the sequel.

The first Mario + Rabbids game followed the traditions of the turn-based tactics genre quite accurately. The game used a grid-based movement system, thanks to which players could move their heroes a certain number of tiles per turn and could use a certain number of actions before or after moving. After all the player characters moved, attacked and used any special abilities, it was the turn of the AI opponent, where they used the same usual rules of turn-based tactics.

Mario + Rabbids Sparks of Hope retains part of this system, but completely reworks how the turn-based movement works. Instead of a grid system, players will now control their heroes in real time. Although the space in which a character can move is still limited to a certain size, players can now move their hero to any place within that space, which gives them much more freedom in how their character acts and where they can finish their turn. During the movement phase, players will be asked to rush behind their opponents to gain an advantage, or use Sparks of Hope’s more dynamic combat mechanics, such as jumping on an enemy’s head, hovering over another enemy, and combining combos together.

Based on the limited footage available right now, it seems that Bowser will follow the same general movement system, being able to rush freely around the arena during his turn and being able to combine a series of movement-based attacks. While each character will probably be able to swap their weapons, as was the case with “Battle for the Kingdom,” it looks like Bowser’s main weapon type will be explosives, and the trailer shows him launching a powerful shot from his rocket launcher. Although it has not been confirmed, it is likely that these attacks will deal AoE damage, just like the explosive weapons in the previous game.

Each character in Mario + Rabbids Sparks of Hope will also have a number of special abilities. For example, the trailer shows Mario raining stars, and Peach Rabbit heals his allies. Bowser’s special abilities are currently unknown, but it’s likely that his moves may be more tank/attack based. This should go well with the new Sparks of Hope combat system, which focuses on the use of combos. For example, at the end of the trailer, Rabbid Mario shoots an enemy in the air, which is then knocked out of the arena by an ordinary Mario. It is very likely that Bowser’s heavy weapons and possible special abilities will make him an excellent tool for destructive combos.

Mario + Rabbids Sparks of Hope will be released on October 20, 2022 for the Nintendo Switch.