Home News Described smartphones in a letter she wrote in 1969 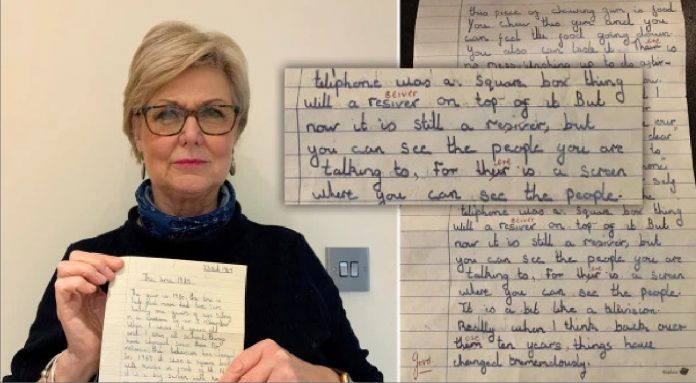 A couple in England found a letter written by an 11-year-old girl about future technology in 1969. The sentences mentioning the features of smartphones in the letter surprised. The letter, which contains predictions about how technology will be in the 1980s, even mentions video talking on mobile phones.

The name of the girl who wrote the letter, which appeared 51 years later, is unknown. It is not known whether the 11-year-old girl survived, who wrote in her letter that in 1980, phones would have a large screen and a camera, and video chat was possible. It was surprising that the woman, who will now be 62 years old, predicts future technologies.

The date in the letter found by a couple in their 60s living in England reveals when it was written. The letter was written as a homework, according to the British news site Mirror.

Here are those lines in the letter:

The year is 1980, I’m 21 years old and I’m sitting on a floor mat. I remembered when I was 11 years old and went to school, things have changed a lot since then. Television, for example, in 1969 there was a button in front of the television. Now there are remote controls that allow you to turn the TV on and off.

I got married and I work in a bank. I have wanted to work at the bank all my life. My wife will soon return home from work, but there is no more tea we brewed in 1969. Nowadays we only consume chewing gum. You may ask if you can fill up with chewing gum, but these chewing gum serve as a meal, and as you chew it you feel as if a real meal is passing down your throat. They are really useful and in this way, there is no dishwasher to wash out.

Here my wife came. When he sees me he always says “push the button, honey.” This button enables our door to be opened automatically.

-Hello honey, I have to video call a friend.

-Then spruce it up a little.

What we called a phone in 1969 was a square box with an antenna at the end. Now it has a huge screen and camera so people can talk to their friends on video. It looks a bit like a TV. When I look back 10 years ago, I can see that everything has changed tremendously.