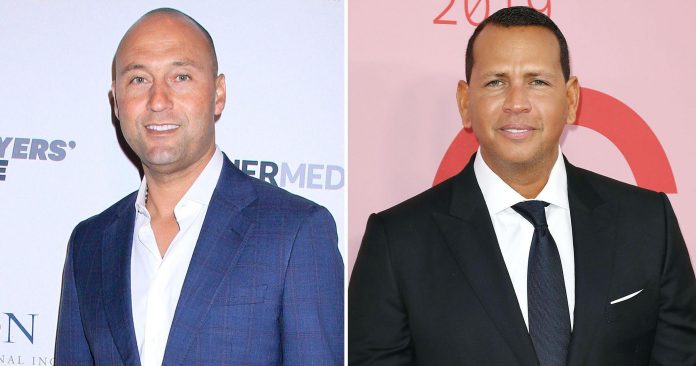 The 48-year-old Baseball Hall of Fame member said he lost “trust” in the former Texas Rangers player, 46, when he spoke about Jeter in an interview with Esquire in 2001. “These comments bothered me because, as I said, I am very, very loyal,” the ESPY Award winner explained in his upcoming documentary series, “Captain.” “As a friend, I am loyal. I just looked at it like, “I wouldn’t do that.”
Rodriguez was not yet a member of the New York Yankees, but there was a lot of discussion at the time about which shortstop was better. In an interview, the New York native said there was “no rivalry” between him and Jeter, but his next comments caused tension.

“Jeter was blessed with a lot of talent around him. So he never had to lead,” Rodriguez told an Esquire reporter. “He doesn’t need to, he can just go and play, have fun and take second place. I mean, you know, taking second place is completely different than taking third or fourth place in the lineup, because you go to New York trying to stop Bernie [Williams], [Paul] O’Neill and everyone else. You never say, “Don’t let Derek hit you.” It’s never your concern.”
The baseball commentator later apologized for his remarks, but Jeter apparently still considers the incident a turning point in the couple’s relationship.
“In my opinion, he got his contract, so you’re trying to downplay what I’m doing, maybe to justify why you’re getting paid,” he said on the ESPN series, which premieres on Monday, July 18. “When we talk about statistics, mine has never been compared with Alex’s. I’m not blind. I understand that. But we won! You can talk about me as a player all you want. This is normal.”
Kate Upton! Hannah Davis! Famous wives and girlfriends of MLB players
Read the article
The New Jersey native added: “But then it all comes back to trust and loyalty. That’s what the guy feels. He’s not a real friend, that’s what I felt. Because I wouldn’t do that to a friend.”
Rodriguez, for his part, said he felt guilty about the comments at the time, but doesn’t take them back.
“When it became known, it was very bad for me,” explained the former Seattle Mariners player in The Captain. “I’ve seen it happen. The way it was written, I absolutely said what I said. That was the comment I’m standing behind today. It was a complete tsunami. It was one of the greatest teams. To say that you don’t need to focus on just one player is perfectly fair.”
“The Captain” will premiere on ESPN and ESPN+ on Monday, July 18, at 22:00 ET.