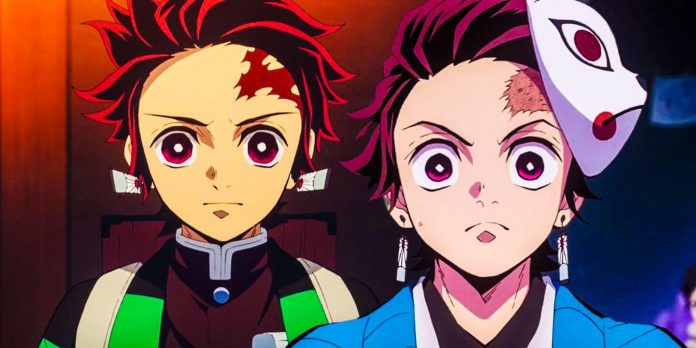 Warning: Contains SPOILERS for Seasons 1 and 2 of Demon Slayer, as well as Issue #129 of Demon Slayer.
The Demon Slayer asks viewers a subtle question in the form of what appears to be a scar on Tanjiro’s head, which in the first season completely turns into another mark. Unlike the evolution of Tanjiro’s physical abilities, which are usually explained throughout the series when he embarks on a series of tasks aimed at improving his combat prowess, Tanjiro’s Demon Slayer mark is not fully considered. However, this should gain more clarity and importance in the upcoming anime arcs.
So how did Tanjiro get his scar? Initially, this is due to the injury he received as a result of rescuing his brother from a falling boiling kettle. So the fact that his scar changes in episode 4 after the Hand Demon crashed into a tree will mean that the mark will change because this incident aggravates the scar as blood drips from that spot. But it doesn’t make sense either visually or logically. The burn scar would not have turned into a line of scars due to Tanjiro’s broken mask, and its surface area would not have changed. It also doesn’t make sense for the scar to become even more scarred.
Link: How strong is Tengen Uzui from Demon Slayer?
Instead, it’s worth considering that Tanjiro’s mark has never actually been a scar, but instead has always been the mark of a demon slayer— something similar to the marks that can be seen on various demons in the series. They are similar in that they denote the considerable power of those who are marked by them, although for demons this power is often not achieved by their own means, for example, by receiving any amount of blood from the main villain of the series Muzan Kibutsuji. In the series, Tanjiro’s father, Tanjuro, is shown with exactly the same “scar” on his head as his son, and it is unlikely that the explanation for this is that they both had exactly the same incident with scars from a boiling hot kettle. Thus, it is clear that this is an inherited trait, and not the result of an accident. With that in mind, his battle against the Tame Demon makes more sense, as it is the first stronger demon Tanjiro fights in the Demon Slayer, even if it pales in comparison to his later opponents.
The manga delves into Tanjiro’s Mark from Demon Slayer
In the manga, Tanjiro’s mark is shed much more light, especially in explaining how the mark manifests. Chapter 129 shows that the Mark appears on those whose bodies go through special superhuman circumstances – with a heart rate reaching or exceeding 200 beats per minute and their body temperature reaching or exceeding 39 degrees Celsius. This perfectly explains why the incident with the teapot caused Tanjiro’s tag, since both the temperature of the teapot and the rapid heartbeat caused by caring for his brother and sister (and the pain) are likely to lead to both of these circumstances.
If season 3 of Demon Slayer continues to follow in the footsteps of the original manga’s plot, not only will this become more obvious, but the Tag will become a much more important aspect of the plot for several reasons. However, for now, to avoid spoilers, it’s worth noting only that this is more important than just a scar that looks cool — since the visual appeal of “Demon Killer” and attention to plot details tend to go hand in hand.
Will Tanjiro’s scar continue to change in the third season of “Demon Slayer”?
Season 3 of Demon Slayer will follow the following storyline from the manga: The Arch of the Village of Swordsmen. Now that the Mugen Train and Entertainment District arcs are complete, Tanjiro’s journey to fight the Kibutsuji Muzan in battle and defeat the demon lord once and for all is fast coming to an end, meaning that Tanjiro will soon learn more about himself and the true meaning of his scar. The second season of Demon Slayer featured Tanjiro’s sun breath, a technique inherited from his father as well as the Mark. With this new information in hand, Tanjiro eventually learns the same secrets from the manga about what his scar really means. This could have been resolved in the third season of the Demon Slayer Swordsman Village Arc, but the manga covers most of this in the later chapters of the Infinity Castle Arc. Thus, Tanjiro’s scar may not change anymore in season 3 of Demon Slayer, but he is getting closer to finding out the whole truth.

IT True Story: The Real Crimes that Inspired Pennywise