Home Entertainment Demon Slayer: How much has Noske changed since the first season? 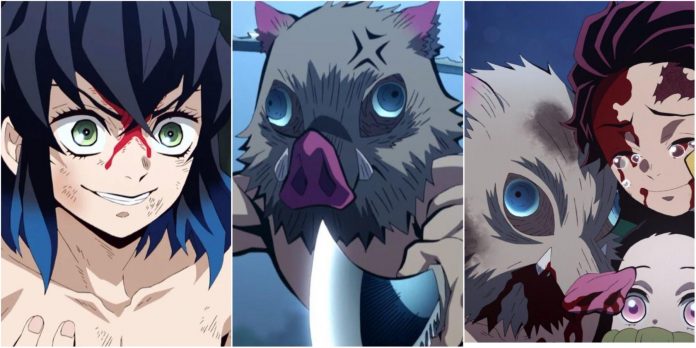 Inosuke Hashibira burst onto the stage of the first season of “Demon Slayer” in a typical manner for Inosuke: screaming, fighting and forgetting people’s names. Two seasons and a movie based on the intricate plot of Koeharu Gotoge, Inosuke has changed a lot compared to the wild wild child he used to be.

Difficult childhood moments have turned him into an independent being who cares only about himself. Now, thanks to near-death adventures with his friends and Hashira, Inosuke is even more transformed into a person who cares deeply about his loved ones. This is how Inosuke transformed during the story of the Demon Slayer.

Introducing Inosuke: The Arch of the Tsuzumi Mansion

For the first time we meet Inosuke in the mansion of the demon Kegai. Kegai traps his victims by using his blood demon art to alter the internal structure of his mansion, confusing the victims. Zenitsu and Shoichi become victims of this ability and walk around opening as many doors as possible to escape. Behind one of these doors was the room Inosuke was in. When Zenitsu opened it, Inosuke rushed in to fight Kegai, eventually Tanjiro, and has been kicking and hitting demons ever since.

Inosuke’s childhood was unusual. He lost his mother to a demon and was raised by boars. In the end, the sow that fed him died, which led to Inosuke taking care of himself for most of his life. Most likely, Inosuke does not often communicate with people. When he really encounters people, he sees them as just an object to test his strength. This is evident from the story of how he became a demon slayer in general. He came across a young demon slayer in training and announced a competition with him. If he wins, he will take his Nicherin blades. Inosuke won, learned about the demons and passed the Final Selection. He also treats demons that way. When he encounters Kegai, he says that he serves as his “springboard” so that he can become even stronger.

He also engages Tanjiro in the midst of a battle with Kegai along with him. He steps on Teruko, the little girl Tanjiro saved, and taunts him with his blades. He also fights Tanjiro again when he tries to protect Nezuko’s box from Inosuke’s attack, as he feels that a demon is hiding inside it. It is clearly established that Inosuke first acts with his fists. Given that most of his battles are to test and boost his strength, he regards demons and humans as nothing more than test subjects to develop his physical strength.

After defeating Kegai, Inosuke goes to Wisteria’s House with Tanjiro, Zenitsu and Nezuko in boxing to rest and heal his injuries. Inosuke’s etiquette and manners, or lack thereof, are both interesting and terrible. In particular, Zenitsu is delighted with how uncouth he is. He doesn’t eat from the dishes, is rude to the owner of the house and continues to pick quarrels over such stupid things as choosing a bed to sleep in.

Inosuke is currently not tied to either Tanjiro or Zenica. His time in the Wisteria House is just needed to recover, he even forgot about the desire to kill Nezuko. We hear anecdotes about Inosuke’s views on the world, but nothing more. Even when he and Zenica see Nezuko for the first time, he doesn’t seem to care. He doesn’t seem to consider Tanjiro, Zenica, or Nezuko friends; not yet, at least.

The Battle of Mount Natagumo

No wonder Inosuke is the first to rush into the forest on Mount Natagumo, and Tanjiro follows him. Given the creepy and possibly fatal situation they find themselves in, Tanjiro tells Inosuke that he is happy to be there with him. He says that the ominous smell coming from the mountain scared him a little, but he was glad that Inosuke went with him to explore the area. This time Inosuke was silent. He immediately changed from aggressive to stunned by Tanjiro’s kind words to him.

He remembers the owner of the wisteria house, who was also kind to him. She offered to wash his dirty clothes, gave him fresh and soft clothes and cooked tempura for dinner. She also left them with encouraging words before they set off for the mountain. He digests these two acts of kindness in complete silence and disbelief. Under the boar’s head, he probably looked wide-eyed, shocked, and maybe a little confused; however, his silence spoke volumes.

He was raised by animals that don’t show emotions the way humans do. Most likely, he had never heard of anyone treating him like that because he had never been surrounded by people. Inosuke also saw people as a way to test his strength, so it’s likely that he never gave anyone the opportunity to get to know him better. It’s not surprising if Tanjiro and Zenitsu are the first people to spend so much time with him, which naturally leads to them knowing him better than most.