Home Celebrity DEMI LOVATO PRESENTS ‘ANYONE’ AT THE GRAMMYS 2020 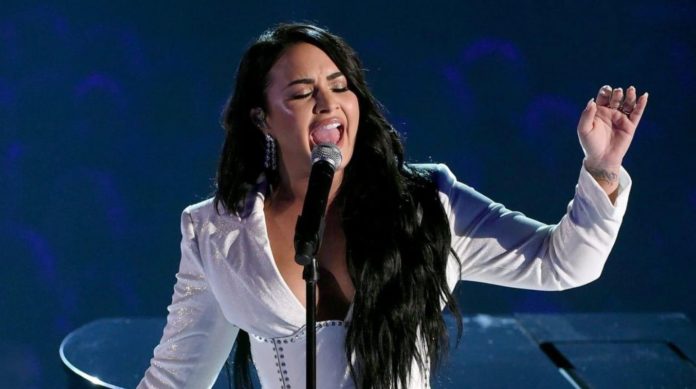 The singer was on the verge of crying when she stepped on the Grammy stage.

The Grammy 2020 continue to give us incredible moments. On this occasion, it was Demi Lovato’s turn , the singer was away from the stage after facing health problems, rehabilitating herself and finding the strength to get ahead.

Although he decided not to parade through the Grammy’s red carpet , Demi gave her fans an emotional performance that left more than one on the verge of crying. We tell you all the details.

Demi dressed in a beautiful white dress, on stage, accompanied by a pianist and had a great return to music with her presentation through the song “Anyone”, whose lyrics have great meaning for her.

Apparently the singer was nervous and not for less, but showed that she is still one of the artists with great talent and an impressive vocal reach. In the first few seconds, Demi stopped singing, the crying beat her and she published her cheered to encourage her, the singer took a few seconds and took the microphone again.

“Anyone” represents the fight of Demi after suffering an accident to ingest harmful substances, but the singer managed to survive and returned stronger than ever.

Demi Lovato is overwhelmed as she takes to the #GRAMMYs stage for her first performance since her 2018 overdose. You can feel the raw emotion in this clip ❤️ pic.twitter.com/3F1vCum381

Fans are surprised and expressed their excitement at seeing her recovered. The singer began a new stage and will soon sing the national anthem of the United States, during the Super Bowl.

Inconsistencies in the timeline that fans haven’t noticed