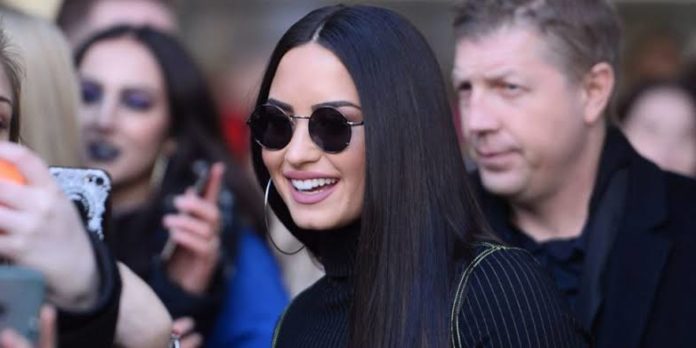 Demi Lovato has been out of the vices for a year now and it seems that she has done quite well, recently gave a talk about the problems she has experienced, such as bulimia and addictions, after that, she shared with her followers a photograph very special for her, in black and white tones, where she introduced her new boyfriend through instagram, who received comparisons with Justin Bieber, this is the Austin Wilson model.

That was the impression that her fans had when they saw the photograph, and that is due to tattoos, they can be seen in front of a mirror and Austin Wilson hugging and kissing her.

She did not bother to write something at the bottom of the picture, a simple red heart was more than enough to inform her followers about her new love, which left everyone shocked, because nothing was known about this young model, until a few days ago it was speculated that it was the actor Mike Johnson.

On the other hand, the young man has shared a similar photograph, but in color, likewise, the couple is hugging in front of the mirror and this time you can see the striking pink color of Austin’s hair.

The history of their relationship, or how they met, has not been made public, but according to speculation it was through Thomas Trussell III, who is a mutual friend of both.

And is that the young Austin Wilson comes from a family with values, because he is very attached to his brothers, has a great bond with his mother and admires his father, George Wilson, who is a professional skateboarder and also was part of the Z -Boys, and has a very peculiar taste, body art, that is the reason that explains why he has so many tattoos.

Demi Lovato’s sentimental life in the last three years has not been very moved, after ending her relationship with Wilmer Valderrama, with whom she dated for more than six years and even got engaged, she has been known small romances, but they have not arrived To last a long time.

Kylie Jenner is showing off as the fallen angel on Instagram

Kenneth Branagh identified the star cast of “Ghosts in Venice” in...