According to the article published by the portfolio manager Jeroen Blokland, the dollar circulation rate has experienced a historic decline. These low data on the speed of money circulation show us that people avoid economic activities due to the coronavirus epidemic and economic concerns. So how will this picture resonate on the Bitcoin front?

The dollar circulation rate dropped significantly in the second half of this year. The famous portfolio manager Jeroen Blokland also stated that theoretically, the speed of money circulation will increase with the increase in economic activity and that there is much more money in the market now than normal. While the amount of dollars in circulation gradually increases with the money injection policies implemented by the Fed and the US government, both this increase and the slowness of the money circulation lay the groundwork for inflation.

In the table published by Jeroen Blokland, it is easily possible to observe the record decrease in the circulation speed of the dollar. According to the table, the circulation speed, which has shown a systematic downward trend since 2008, sees the lowest value in its history by experiencing a crash as of 2020. 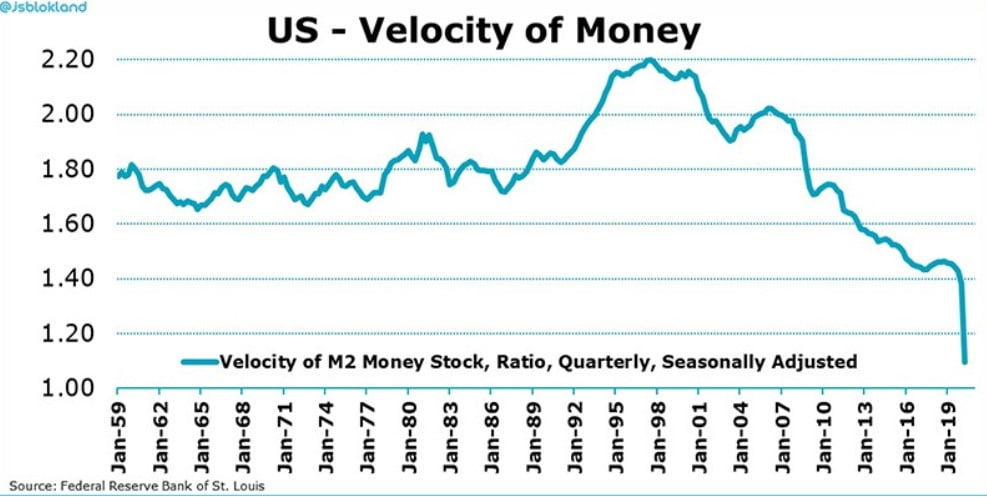 What Does It Mean for Bitcoin?

The decrease in the circulation of money is an indicator that economic activity is decreasing. Noting how rapidly the economic activity has declined, Blokland said; he interpreted this as “the money supply is more than it should be.” The surplus in dollar supply brings with it inflation for the dollar. The dollar supply in the market increased and inflation was triggered with the aid packages announced one after another by the USA to relieve the people in the difficult economic process and the interest rate decisions of the Fed. For most experts, the situation this time is different from the previous ones.

Well, who can show enough resistance to inflation; What will people do looking for a safe investment vehicle? Experts predict that people will turn to assets such as Bitcoin. Such interest will inevitably play a triggering role in the price of Bitcoin (BTC).

In our country, names like Robert Kiyosaki, the author of investment books and businessperson, who are also on the bestseller list, claim that the banks will collapse and the dollar is coming to an end. Kiyosaki recently said in a social media statement that Warren Buffett’s sale of bank stocks was a sign of collapse and counted Bitcoin among the smartest investment tools ever since. In fact, according to Kiyosaki, the Bitcoin price can go up to $ 75,000 within 3 years. Famous commentator PlanB, known for his S2F model, goes a little further, predicting that the BTC price will rise up to $ 100,000.

Selena Gomez is fighting coronavirus thanks to the reissue of her...

Tactics to Enable Voice Communication in Any Environment You Cannot Speak

BLACKPINK IS RECOGNIZED IN CHINA AS THE BEST ARTIST OF 2019

Goldman Sachs: We Seen Deep in the Markets