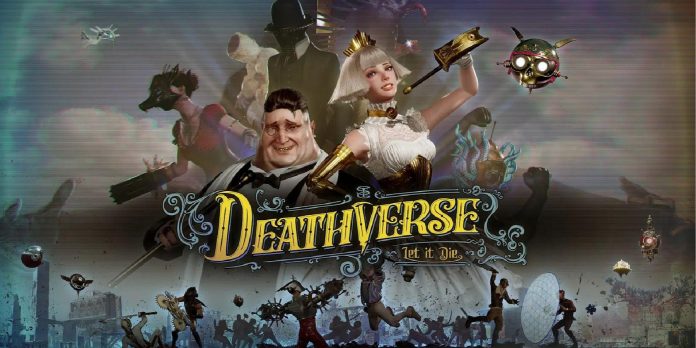 Few games have the courage to call themselves “The Greatest Game ever created”, however, Let It Die 2016 boldly stated that in fact it is “The greatest game ever created… Probably.” This unusual survival role-playing game started with players dressed only in underwear, and allowed them to fight their way through floor after floor of enemies, collecting new loot and listening to the instructions of the reaper on a skateboard, known as Uncle Death. Six years later, GungHo Online is ready to release a sequel to its cult classic game with Deathverse: Let It Die, a battle royale for 16 players that looks as bloody, strange and stylish as the previous “Greatest Game of All Time”. Done, probably.”

Suda 51’s Grasshopper Manufacture is not at the helm of this project this time; however, the Deathverse still contains a lot of the same charm and eccentricity. These qualities make sense, as many of the same developers as in the original Let It Die are now working on this battle royale in SuperTrick Games. Game director Shin Hideyuki states that initially Deathverse was not conceived as a PvPvE-battle royale in the arena, but after seeing the success of the PvP elements of Let It Die, the team decided to “hone some good ideas”, which led to the creation of Deathverse: Let It Die.

At first glance, the Deathverse looks as strange as its 2016 counterpart. Starting with the design of the world, SuperTrick sought to make every detail in the world look and feel as strange as possible, adhering to that original post-apocalyptic feeling that made an indelible impression on the players in the original Let It Die. When developing Deathverse, the team had more flexibility in what it could do, since the game takes place hundreds of years after its predecessor. In Deathverse, players will find cryptids, strange plants, strange ruins, and a “general sense of strangeness” suitable for the world inhabited by a skateboard reaper.

This feeling of “strangeness” is complemented by a soundtrack led by Akira Yamaoka, known for his work on the Silent Hill and Lollipop Chainsaw series. Amid all the death and destruction, Deathverse: Let It Die focuses on the TV show Death Jamboree, which every player is trying to win. This TV structure gave Yamaoka an exciting challenge for the sound design of this game, as the mood changes throughout the round, and the “DJ” Death Jamboree changes the sound environment and music of each round. This is certainly an interesting juxtaposition that occurs when players immerse themselves in the dark world of the Deathverse, and then listen to the bizarre main theme of the game.

As for the gameplay, SuperTrick’s mission is clear: it will be a new type of battle royale. The team strives to make something that will be difficult to compare with other games, and not only because of the colorful aesthetics. Deathverse still pursues the same main goal of the genre, to remain the last survivor, but fills in the gaps with Hunter enemies who chase players and keep the action going between lulls in PvP battles, and then reduce the action with smaller arenas where close quarters combat is the main focus.

SuperTrick says it’s a survival of the fittest game where killing isn’t the only option; being the smartest in the room is what’s most likely to win. Players will need to know when it’s best to fight, or perhaps hedge their bets and let the Hunters pick up some players for them. What’s most obvious about the SuperTrick Battle royale is that it’s going to be a crazy and constantly fascinating experience. Deathverse: Let It Die is a very dense arena in size, thanks to which players are always running to something or someone or from someone.

When it comes to how players will hack and hack other players, Deathverse: Let It Die draws inspiration from fighting games, and one of the biggest advantages is the huge amount of weapons available to players. There are a lot of weapons in the Deathverse, and everyone has different death strikes, basic skills, and skill bonuses. Also a bunch of animations. Each weapon requires a certain amount of attention when used, opening the door to multiple play styles. For example, a katana is a dexterous but weak weapon, ideal for countering enemies. Meanwhile, hammers are slower, but do a lot of damage if players calculate their strikes correctly. There are also some purely chaotic weapons, such as a saw, which allows players to rush at full speed at other players while holding a live power tool.

But it’s not enough that players mow down every enemy in sight; they also have to do it in style. Part of the frame of the Deathverse TV show is that the players do everything for the camera and at the same time have to look great.