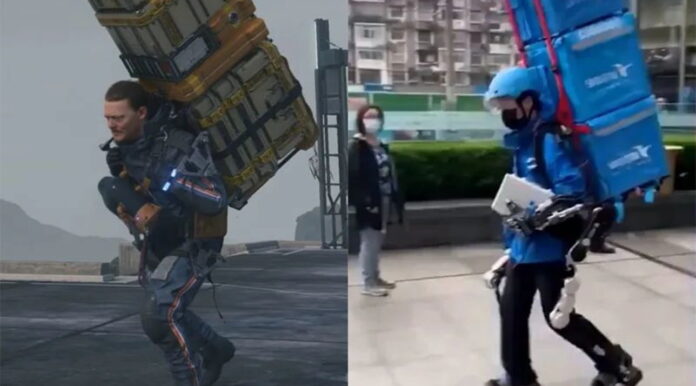 A Chinese company is testing a costume with robotic components that will lighten the couriers’ burden. The developed costume draws attention with the costume similar to the one worn by Death Stranding’s hero Sam Bridges.

A Chinese food delivery company is testing a new costume that its couriers can wear when they go out. Designed for employees of Ele.me, a food delivery application used in China, the new costume allows it to carry a lot more load, while likening them to Death Stranding cosplayers.

Inspired by the costume that Death Stranding’s main character, Sam Sambridges wore in the game, this interesting costume is designed to help those who work in industries such as shipping, mail and logistics to lift heavy loads more easily and carry more loads. ULS Robotics, a company specializing in robot technologies, also works on the development of the costume.

The costume that looks like it came from Death Stranding that the couriers will use
The costume includes a robotic system that allows you to carry the overlaid boxes without straining the back and legs. Food distribution companies such as DoorDash and Uber Eats previously decided to test the equipment developed by ULS Robotics in the USA. The robotic exoskeleton attached to the costume allows the user to carry up to 50 kg weights easily.

The Death Stranding costume can also be a great convenience for couriers trying to catch up with people who order more from food delivery companies, as they can’t go out during the coronavirus outbreak. With the development of technology, we begin to come across real-life examples of fantasy elements we see in movies and video games.

Millie Bobby Brown: the real reason she shaved her head!

Is Falling For Bitcoin? Attention to Stock Market Data!

What is the Increase the Number of Ethereum Addresses?